Alpamayo Team #2 Off and Running! 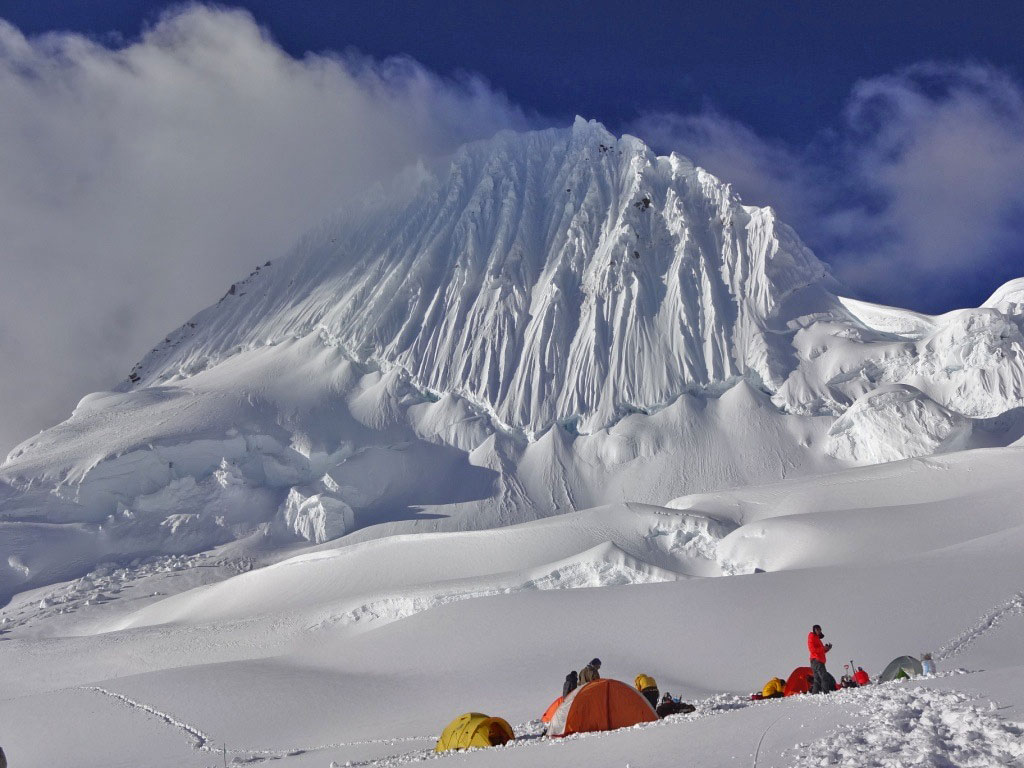 On Tuesday July 9th, we moved to high camp after a 3 day snow storm that had us tent bouded at Morraine Camp. Upon arrival to High Camp, we struggled to set camp up with the almost 1 m of snow that had been deposited at places. But Rich and Ásgeir kept the good spirits that we had had over the entire expedition. Expectant to evealuate route conditions, we decided that after a hard day of work and given the accumulated snow, we’d take a rest day on Wednesday and shoot for the summit on Thursday, putting all our chips in one basket; summiting on the very last day possible.

Since the start of the climb, we all agreed that “we’d be patient and we were not going to quit untill our planes left…” and so we did! This would involve to summit on the last day possible and also descending to Base Camp after the climb. On Wed, I grabbed Juanito, our fenomenal porter, and we went off to break the trail to the bergschund, a task that had not been done for the last 5 days and was contemplated by many from their tents. 1m of snow made it hard to approach the base of the route, but checking its conditions was mandatory, and facilitating the next day’s progress to the climb, a must. 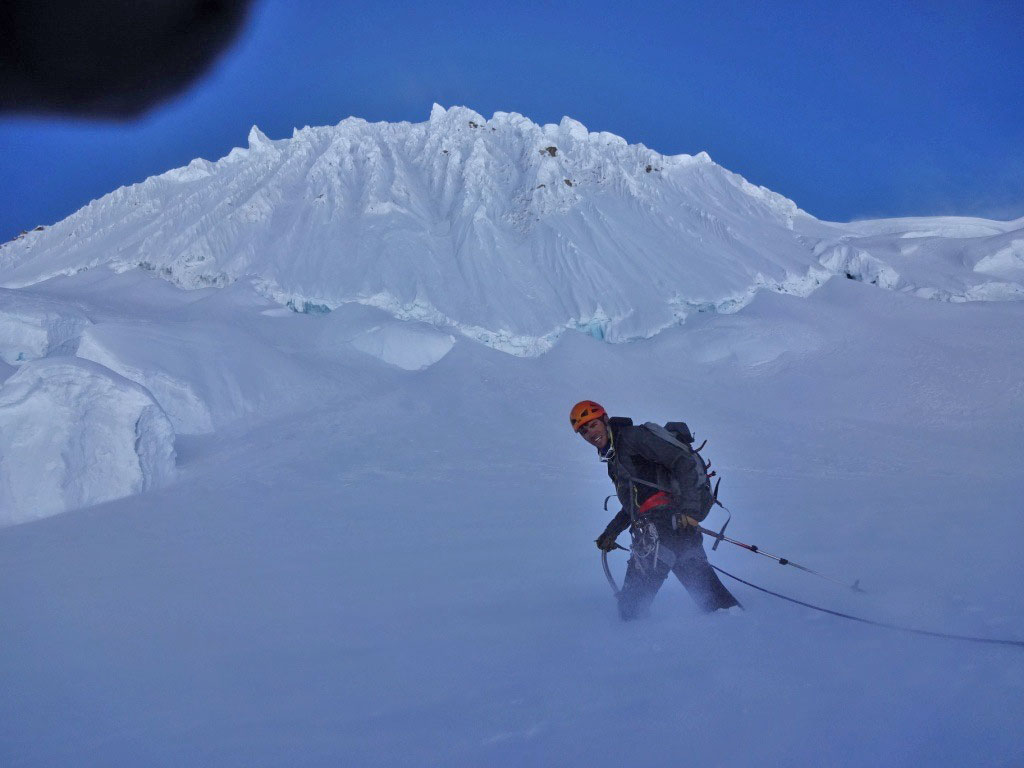 With 2 days of sunny weather, we knew that all this snow would pack down and transform quickly. So we just continued to rest and got ready for our summit bid. At 12:30am of Thursday the 11th, we clipped into our rope and set off to the base of the route up Alpamayo, the “Direct Basque-French”. A somehow populated high camp made us decide to be the first ones up, to avoid being expossed to ice fall from climbers above. We started the climb with a train of headlamps following our tracks 1h behind. After the first 2 pitches of semi-consolidated snow, we were swinging our tools into consistently good quality ice. About 3 rope lengths below the summit of Alpamayo, the sunrise greeted us to the 3rd bluebird sky day in a row, and literally, the 3rd in the entire expedition. By tourning our headlamps off, we entered the narrowest section of the climb, the upper gully that slightly traversing right with the only deviation of the route, grants access to the summit of Alpamayo. 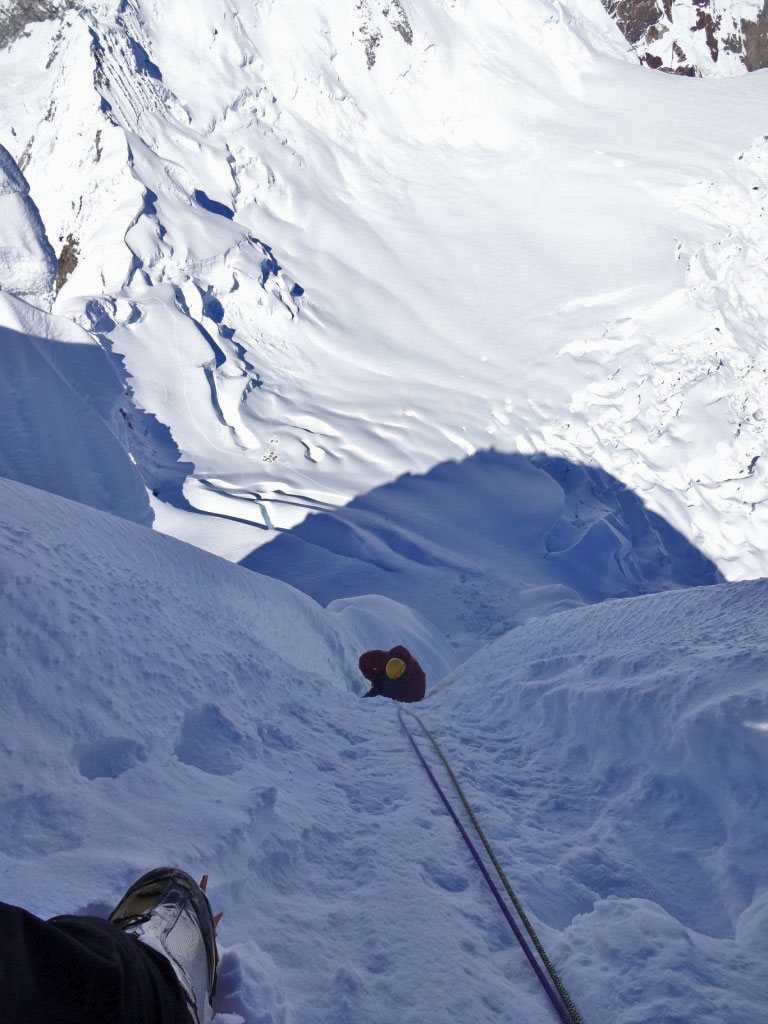 Rich and Ásgeir moved along the entire climb and their sincronized progress below me was pleasant to witness. It is always a treat to climb with those who do their homework before a climb and not only show up excited, but well prepared, trained and determined. At 8:30am the team reached the narrow top of this mountain, where there was only room for 3 or 4 people. After a summit’s high five and mandatory pictures, we initiated our series of rappels down, to give room to the only couple of climbers who followed us successfully to the top and to abandon the strong winds that were hitting the top. Some 9 full 60m rope lenghts after, Rich, Ásgeir and myself were back at the base of the SW face of Alpamayo, with just a few hundred yards to walk back to our camp. It had been a serious 11h30m of climbing up and down this beatufull but challenging peak. Now our minds were set on recovering and start our descent towards Base Camp… We now had only one day left to reach the trailhead, and eventually Huaraz, so to be on time to our bus to Lima and planes back home on Saturday was the goal. 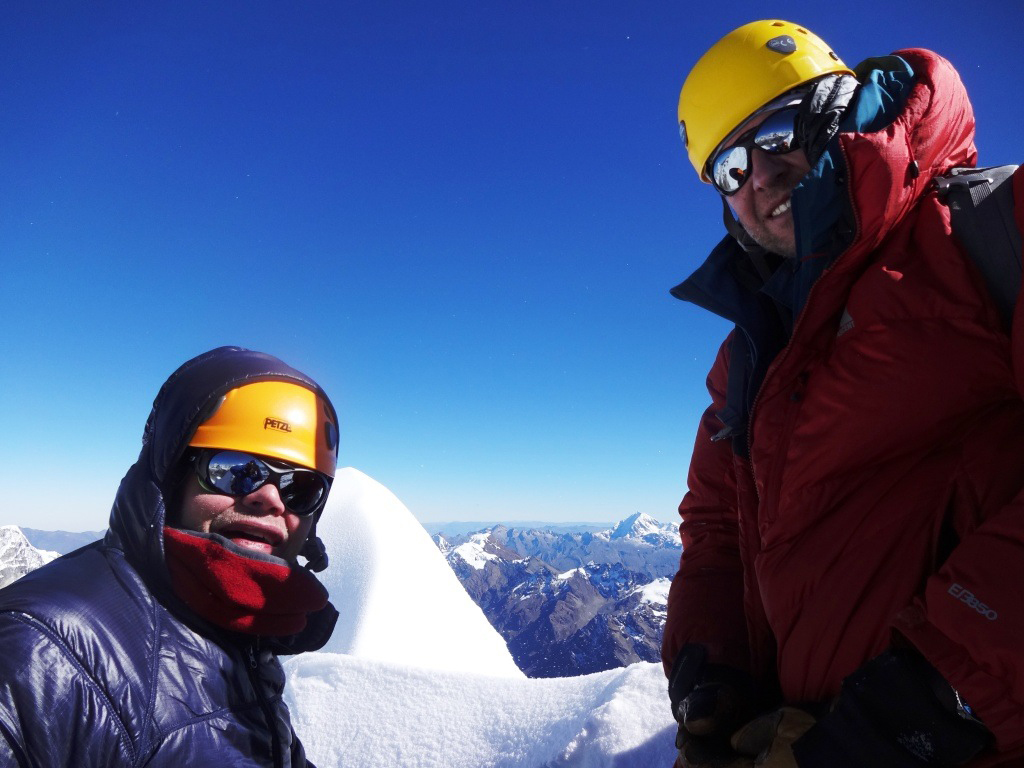 Tired, but with safety in mind, we started our descent through the opened up glacier, and it was to the lights of our headlamps that we crawled back into the dryness of our BC tents, leaving the snow that had been home for the last few days. Our always sevicial cook Francisco and loyal porter Juanito helped us enourmously with this transition, without a doubt, the hardest of all during the expedition. Now, we only had to walk back to the trailhead on the safety of a grass covered path and the thickening of the lower elevation’s air. Jumping into our bus at dusk, we were congratulated by our outfitter’s personell, who took us to Huaraz. With barely a few minutes to order dinner before closure time, we celebrated to local cuissine and went to our eraned 1st bed in 2 weeks, not without greeting SJMG’s 2nd expedition at the hotel and wishing them best of luck on their jurney. This successful San Juan Mountain Guides expedition to Alpamayo was over.