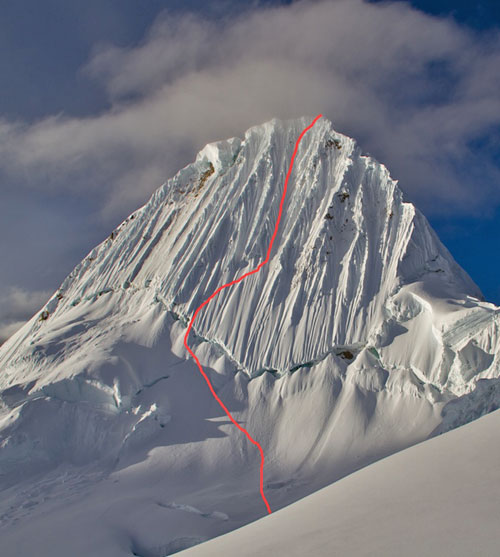 Elias and his team are making good progress on Alpamayo. On the 4th of July they checked in from basecamp, and were planning to do a carry to moraine camp the following day. Everyone was doing well and in good spirits.

Two days later Elias called in with another report. Elías reported that they did a carry yesterday and today they are camping at the moraine camp at 5,000 m.

Tomorrow they will rest and the following day head to high camp. The weather has been good in the am, with rain in the afternoons. The forecast is showing favorable weather upcoming for the next five or so days, hopefully fine summiting weather. Climbers that he has spoken to that have climbed the peak recently have said that the route is in good shape.

This morning, Elias called in again with another update and reported that they took a mandatory weather day yesterday, after taking a rest day the day before.  The weather is looking beautiful Andean blue today. The team is planning to move to high camp today and summit tomorrow or the next day. Today is Rich Doren’s 53rd birthday!

Our second Alpamayo Expedition of the season starts on Thursday and is being led by SJMG Senior Guide Andres Marin.  Stay tuned for more updates!