Last week Ari and I continued the ice climbing progression we began working on last season.  At the end of last year, I had given him a number of training exercises to maintain good fitness for ice climbing season.  Happily, the training seemed to work out very well as he was able to “hit the ice swinging” on the first day of our trip together.

We began the trip at our local crag in Durango, Cascade Canyon.  Conditions are not quite ideal yet in Cascade, but the continued cold temperatures should shape things up in the weeks to come.  We followed by heading over to Ouray to climb and check out conditions in the Ouray Ice Park.  I’m happy to report that conditions are great in the Ice Park at this stage of the season.  It looks like it’s going to be a good season for ice in the park and I can’t remember the last time it’s opened this early.

For our final day we headed to Eureka Canyon for a climb of Stairway to Heaven.  It looked as though there had not been anyone on the climb in the recent past, given the trail breaking required to get to the trailhead and the fresh ice on the route.  Seems like most parties played things conservatively after the storms we received in the previous weeks.  The route is in great condition with fun climbing on every pitch, and a few steep spots to keep the climb engaging.  We opted for the walk off, but would have rather rapped the route, though v-threads are necessary at this point as fixed anchors are buried.

Looks like other routes like 2nd Gully, Highway 666, Whorehouse, and Hoser’s Highway are all in good condition, but I can’t say the same for Goldrush and Fat City.  Hopefully the ice conditions on those climbs will improve as the season draws on, as they are 2 of my favorite climbs in the canyon.

View of Stairway to Heaven from the trail.

Topping out the crux pitch. 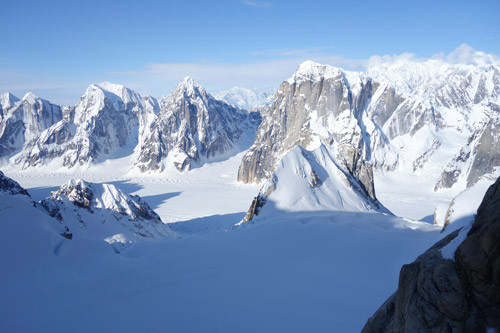