Out Is A State Of Mind

This spring, SJMG Senior Guide Mark Miller and climbing guest Frank Robertson headed to the Alaska Range for a great trip in the Ruth Gorge, and specifically the Root Canal Glacier for an attempt(s)/climb(s) of classic routes like Ham ‘n Eggs and Shaken Not Stirred on the Moose’s Tooth. We asked Frank to write a trip report about his experience climbing with Mark and San Juan Mountain Guides in the Alask Range! 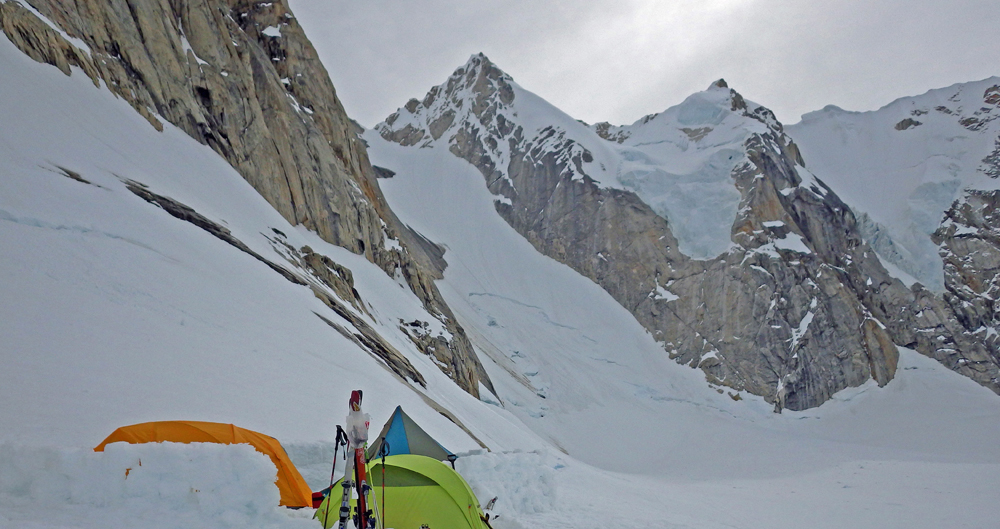 Mark Miller and Frank Robertson went to the Central Alaska Range the second week of May, 2014:

“They told us when we got into Talkeetna that conditions were OK on Ham ‘n Eggs but that Shaken, Not Stirred was out.  It might shape up a bit with the moisture expected in the next pulse and some melt/freeze but it had been really sunny for a couple of weeks without any major precip.  We loaded up our 8+ days of provisions and headed North in the de Havilland Beaver.  Made in 1954, it is way older than Mark, though not quite as old as me: we hoped for the best, both in landing on the Root Canal and in getting a shot at both routes. 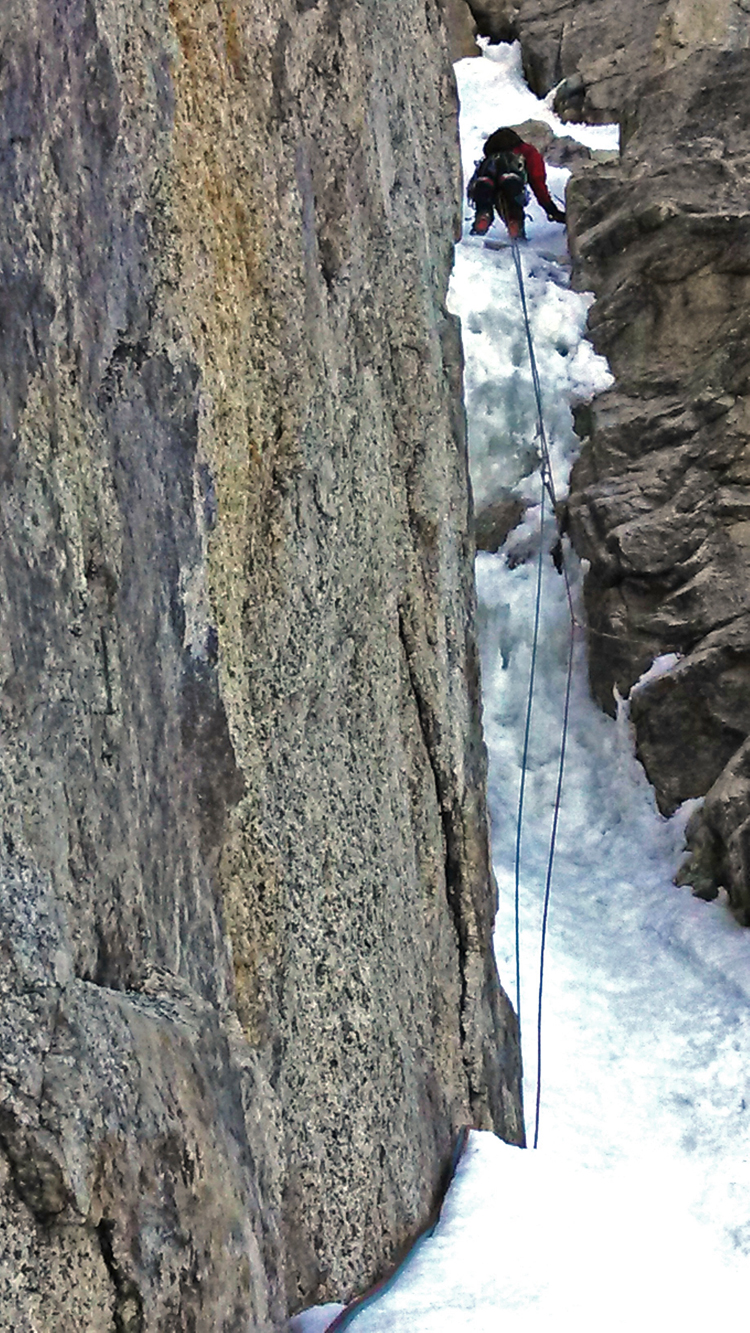 The recon loop through the space above the hanging glacier halfway up the Mooses Tooth put the mountain into a perspective that could not be appreciated from the Great Gorge of the Ruth Glacier below.  I had spent the better part of a week sitting there in a VE25 waiting for it to stop snowing in May of 1998 to attempt the West Ridge.  The wall between the two routes we were doing was huge – just over half a mile long and over 2000 feet high, with the buttress to the left of Shaken 500 feet higher yet: gigantic, gorgeous, golden granite.  The enormity of that multi-summit mass when staring it in the face as Paul banked around for approach made you forget it was “only” 10,300’.

A perfect sweep through the slot and onto the ice, a quick dump of our gear and the plane was off again in less than 10 minutes.  We cruised over to the camp on the flat by the strip to see what was up.  The two guys had just backed off of H’nE, saying that the crux was 50’ run out on snice, in-your-face overhung WI5: sorry, guys, it’s out…  We shuttled our load up to the bench near Shaken to set up (aerial car-camping) away from the seracs at the head of the Canal. 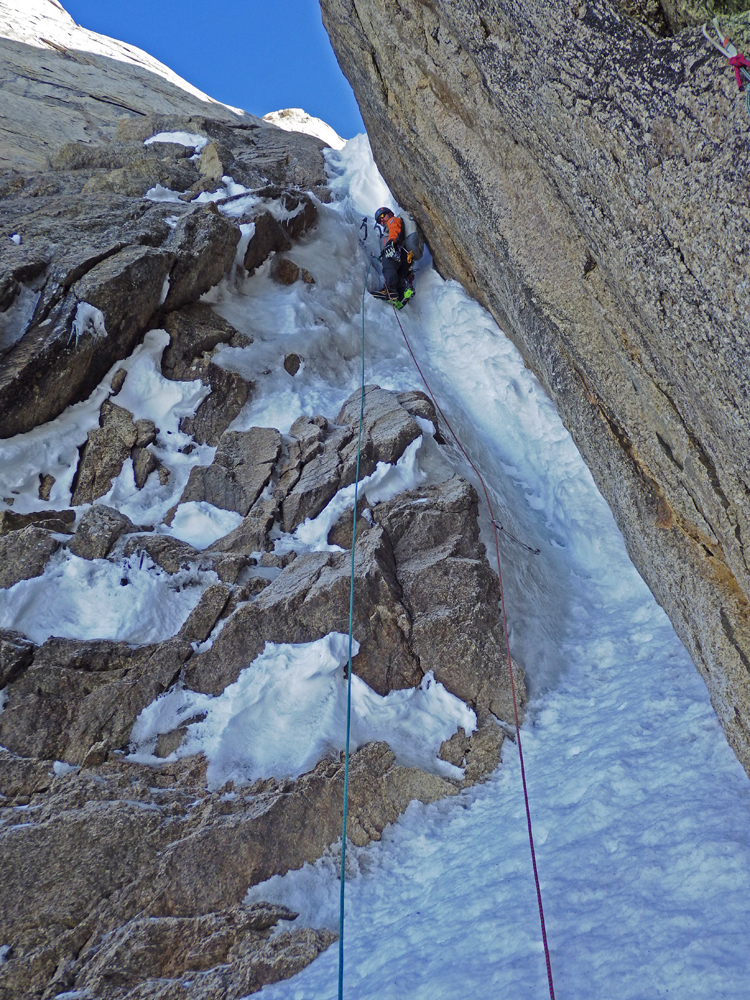 Shortly after 7 the next morning I started up the first pitch of Ham ‘n Eggs, a short M3 rock ramp and step to gain the gully; from there we swung leads on firm snow and snice made temporarily hard by the single digits overnight.  We quickly moved through the lower pitches, including one of my favorites alpine ice leads ever and some steep snowfields.

We watched TAT pick up the party below before we got to the business.  Mark found decent rock pro a bit below the crux and, with a foot swap on a little blob to get in position to stem the rock on the left and duck out from under the overhang, jammed a stubby into the good ice above and pulled through the AI5 section.

From there we had several pitches of great alpine terrain, a lot of kicking steps but with enough steep ice to remind us where we were.  Topped out the route and made the call to get down before it got too hot rather than trudge to the summit.

Countless rappels later (16?) we were down at 4:30 and booked it back to eat salmon burgers and spaghetti with sausage till we were comatose. 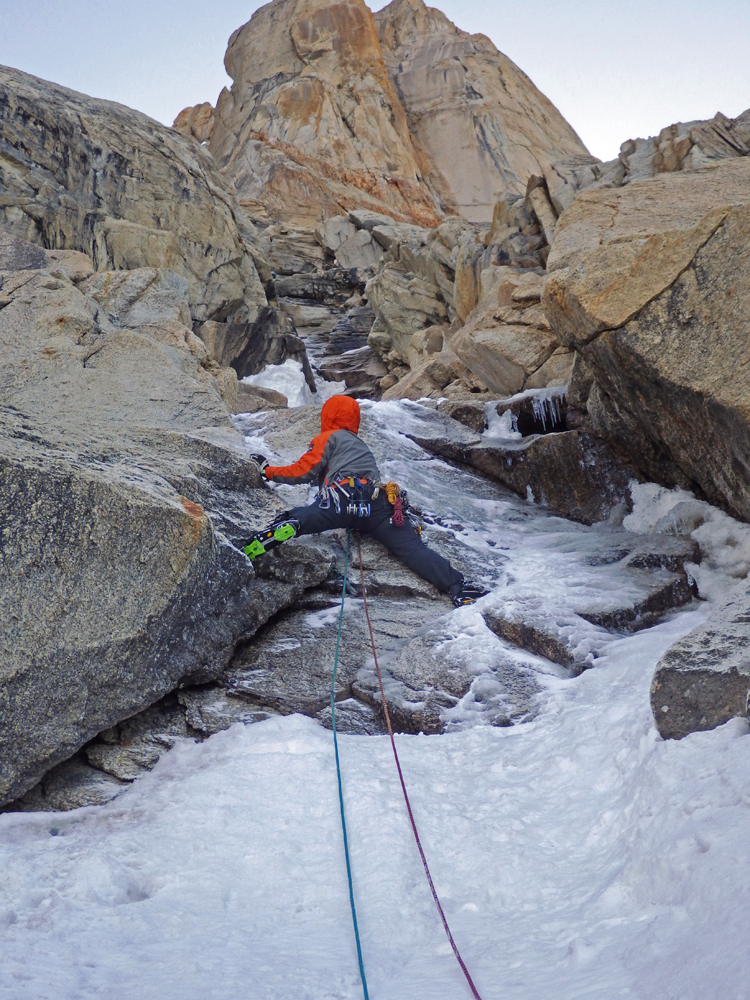 Next day we watched the plane come back to drop another party of two, who came up to the bench as well.  They were psyched to hear we had done the route, since they’d heard the tales from the day before in town.

We recon’d Shaken; the rock down low was largely bare and there were big gaps in the ice higher up, especially at the steep entrance to the Narrows – lean conditions.  We determined to rest another day and, though it looked marginal, there was no way we were not going up to have a closer look.

Our second rest day the other guys started up Ham ‘n Eggs early, but the perfect weather gave way to a moderate storm that came over the top as they started for the summit.  Wisely deciding not to risk invisible cracks on that big slope, they rapped down in a white-out and got back to camp at bedtime.

Day 5, another cold start; not as early as we’d planned since we’d stayed up to be sure the other guys got down OK.  We stared up Shaken at an amazing rocky cleft, glazed with thin ice in spots and dusted by the storm: a dry-tooler’s dream.  Mark got us up some M5 / 5.9 features and we were in it. 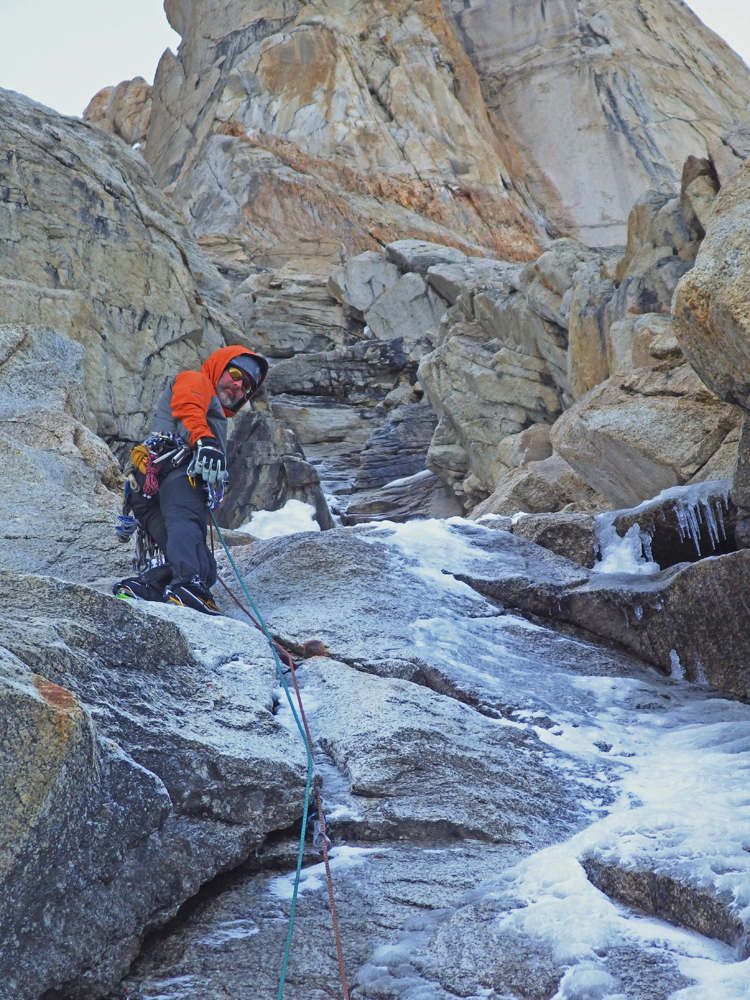 A short snow field, another lean mixed section that was so good it had us laughing and we were at the base of the lower crux.  The talk of it being out sunk in as Mark led through thin, delaminating ice up a steep corner with long stretches between hard-to-place rock gear and a tricky side-step around an overhanging chockstone.  By now the ice was getting pretty soft and a lot of the moves were raking for catch points in the rock beneath – solid M6.

We had not really expected we’d get that far, but now we were running up the snowfields and ice steps to the upper reaches of the climb. The start of the Narrows looked innocent enough, with several short steps of steep ice and more of it back in the groove than we had seen from the ground. But then you saw the longer section a hundred feet up, with a cave beneath an iced-up rock overhang and a dodging-left exit on more AI5 and thinly-glazed rock.  With some improvisation in the cave, a bit of icicle bashing and a decent screw below the fancy moves, Mark got us past the crux and wormed up the channel above.

As I approached the belay the sun hit the back of the gully and the snice turned almost instantly to slush. We were moving well with plenty of energy to go for the remaining few pitches above, but Mark recalled the conditions on the H’nE descent and I had to agree that having done most of the line we should get down ahead of what was beginning to break loose above.  A bunch of soggy raps and a rope snag later we headed for the salmon burgers.  Stopping by Pete and Ryan’s camp on the way, we were raving about the gorgeous route and how amazing it had been to move through those bare-bones mixed sections when Mark summed up the experience: “out” is a state of mind.” 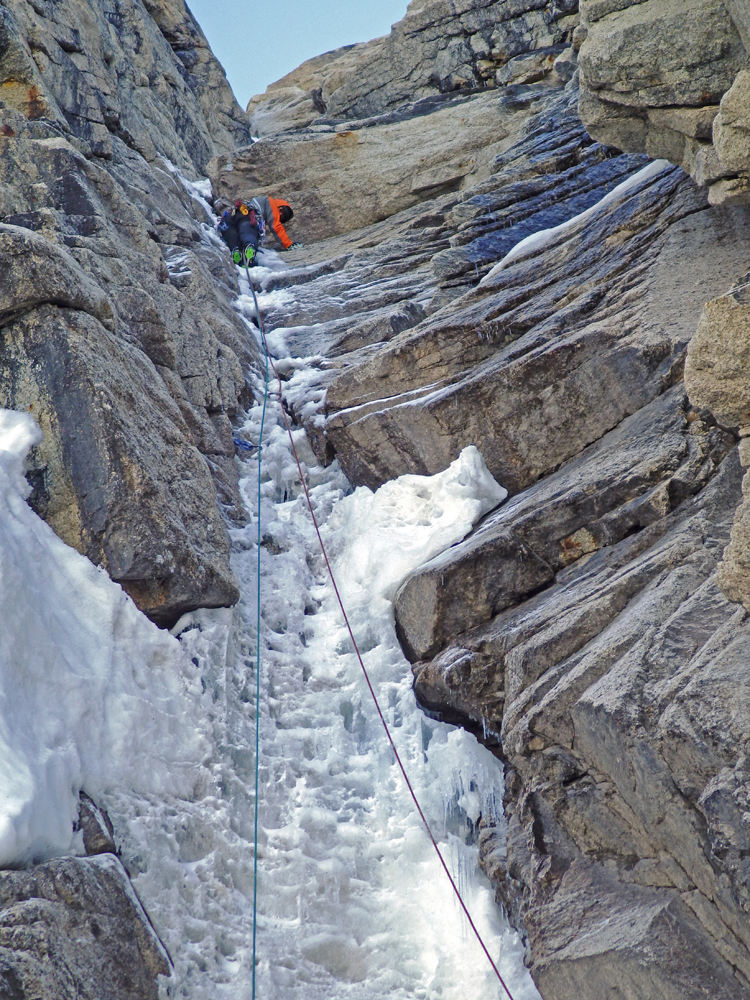 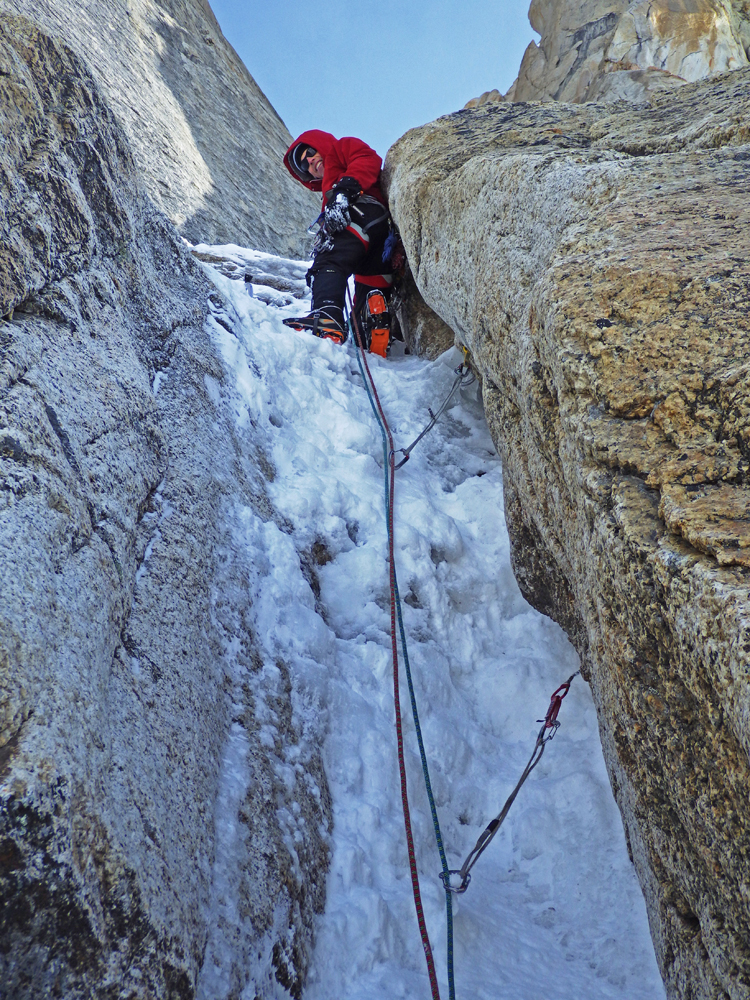 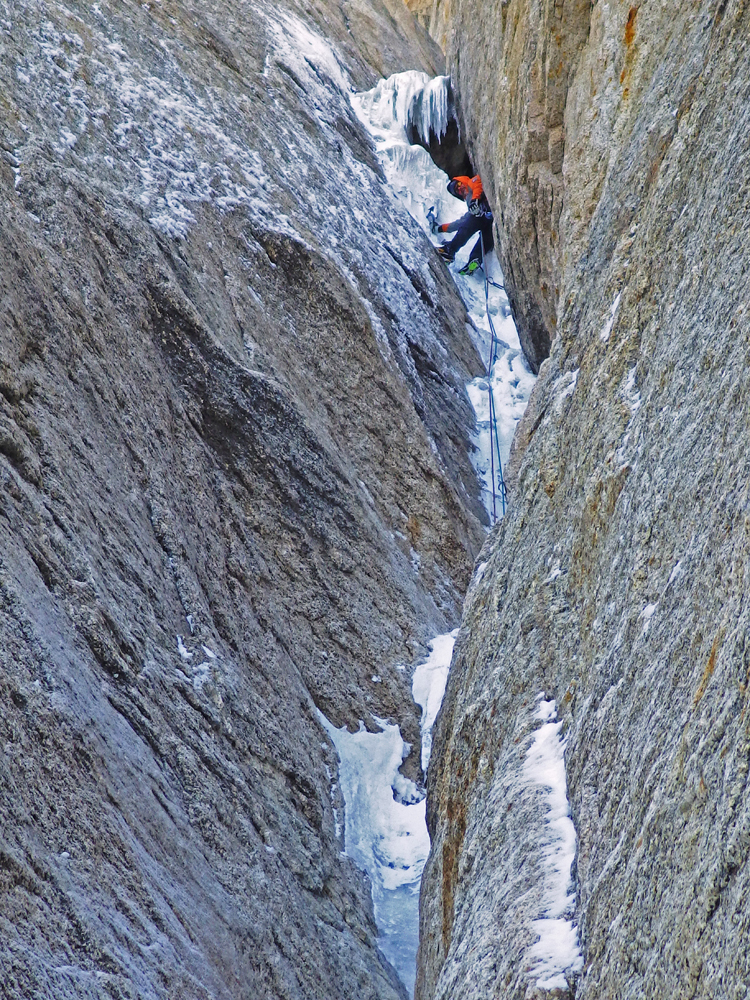 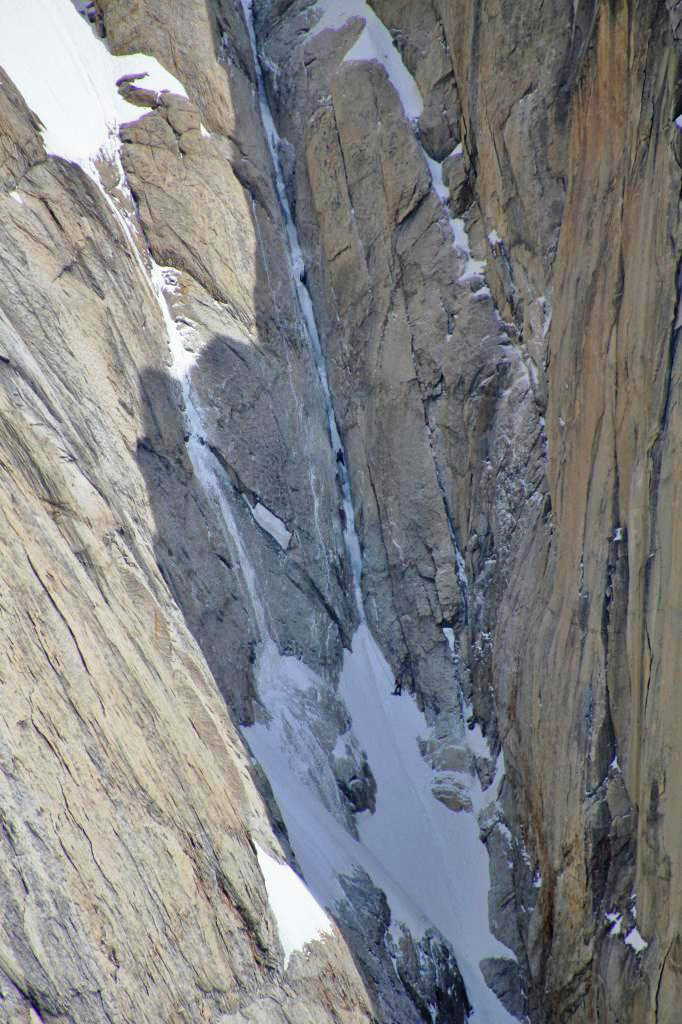 *All photos by Frank Robertson except where indicated