More Info on the Telluride Via Ferrata

A Brief History and Essential Equipment 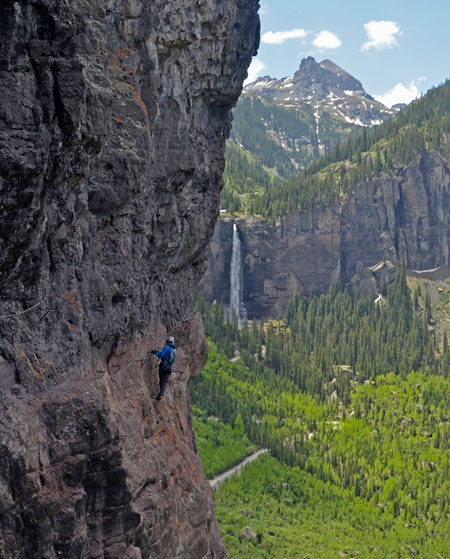 Via Ferrata is the Italian name for what might fairly be called extreme hiking. First built in the Italian Dolomites during World War 1 these “iron roads” were intended to facilitate the rapid movement of troops through technical mountain terrain. Today, these systems of cables and iron rungs climbing up cliff faces make for an excellent mountain adventure for those not necessarily inclined to make the significant investment of money and time into gear and know-how to participate in traditional outdoor climbing and mountaineering.  Consequently, the via ferrata is one of the best ways to get all of the excitement of high mountain adventure for the least investment.   Fortunately, we happen to have one right in our backyard – just outside the beautiful town of Telluride.

Chuck Kroger was a world adventurer, climber, philanthropist, and ironworker who settled in Telluride in the late 70’s. He began building the via ferrata in 2006 but an untimely death from cancer left completion of the project to others. Tellurides via ferrata is affectionately known as the Krogeratta in his memory.

The Krogeratta is a fantastic introduction to the sport – with spectacular positions and views with enough air and exposure for the most experienced climbers while also being completely accessible to those with only hiking experience. Via Ferrattas are simple on the grand scale but definitely deserve respect as specialized systems and knowledge are required to complete them safely. 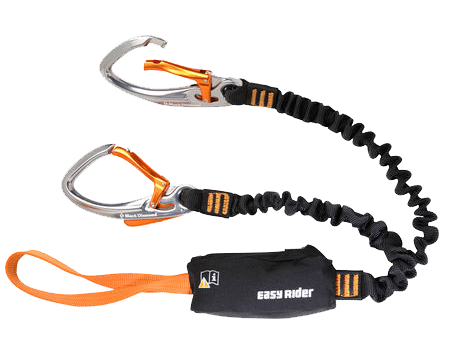 First, everyone needs a traditional climbing harness and helmet – falls and rock fall are a real possibility on these routes. Second, a via ferrata “rig” is required. These are made by many companies but the Black Diamond Easy Rider Via Ferrata set up is particularly nice.

What distinguishes the via ferrata rig from other climbing systems is that it builds a “shock absorber” to the system – that is, if you fall, the system, rather than your body, absorbs all the shock from a fall and you end up making a soft landing just a foot or two below where you fell. A serious mistake that many people make is simply clipping traditional runners or short pieces of rope into the via ferrata cables and ladders. This has the potential to be a serious error because forces multiply in extreme an unexpected ways on climbing systems in short falls without the shock absorbers found in the proper via ferrata rigs.

Never attempt a via ferrata without a rigging system designed specifically for that purpose. Another consideration is that via ferrata’s frequently have sections that are exposed to serious falls, but do not offer cable or rungs for you to clip into, it is important that you consider how you will maintain you and your group’s security through these sections. One way is to move very carefully and/or employ the use of a leader and a rope. Another, is the engage the services of a certified guide with knowledge of the route and a variety of techniques to manage risk. 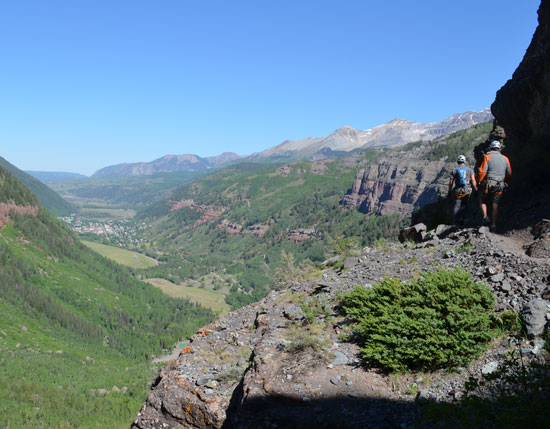 Finally, I would suggest that everyone wear the same footwear on a via ferrata that they would on a traditional mountain climb or hike.  The terrain is uneven and rough and often requires that you stand delicately on small foot stances (while safely clipped into the system of course) when moving through the route.

Via Ferrata’s, while an old approach to mountaineering, are an exciting new development for adventure and exploration of the Rocky Mountains!