5 Things To Do While Attending the Ouray Ice Festival

Today Dave and I headed to Dukes of Hazzard in Silverton’s Eureka Canyon. Having never been on it before, I was pretty excited to get a good look at it. It ends up being two very nice, but distinctly different pitches.

Pitch 1 begins with a nice grade 3 warm-up to a ledge. Above the ledge there are two bolts that protect an M6 looking mixed line that leads up to the obvious curtain of ice. This year the curtain comes down to a chandeliered pillar that touches, though I can’t say it is getting any support from below, as the 1-2 inch wide pencil of ice that contacts the ledge is cracked.

Being more of an ice than a mixed climber, I clipped the bolts and made the rather long step onto the pillar. A few feet up I could make 1 stem to the rock near the first bolt and a little later I could stem to the curtain. While the line looked a bit intimidating, it turned out very reasonable. After that it was a long grade 2 ramp to the next column, which has a really cool cave behind it. I thought the setting was cool and it left me completely protected from anything falling from above, so in I went.

Dave led pitch 2, a really nice, solid column of ice that led to another ramp. From there as the ice ran out he had a few more steps above in snow led to a 3 pin anchor that a party a few days before left, that made a quick and efficient exit back to our cave. From the cave it was a full length rappel back to our packs and a descent down snow covered small talus that challenged our ankles, but did nothing to diminish another great outing with a good friend. 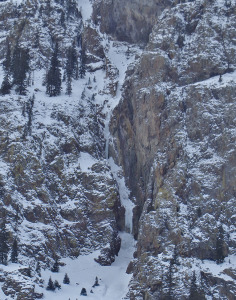 Dukes of Hazzard as pictured from the road 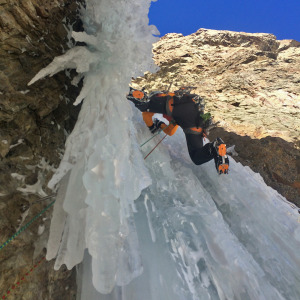 Mark Miller established on the crux 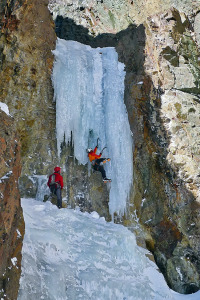 Mark Miller pulling on to the crux pillar 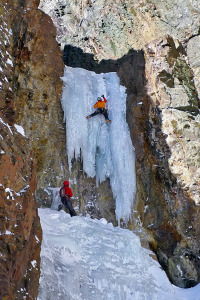 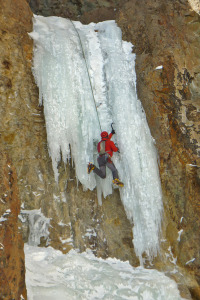 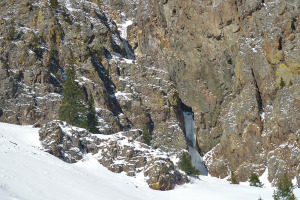 View of Dukes on the approach