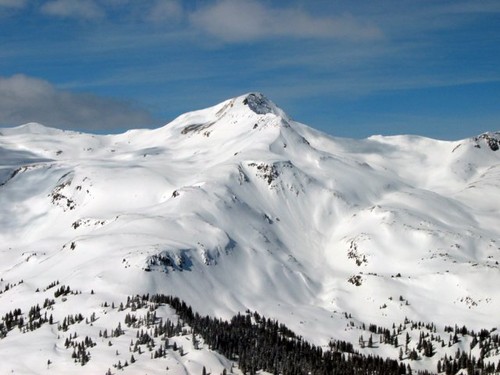 Trico Peak’s East ridge and SE Face. Our team climbed this ridge from Red Mountain Pass then into Mineral Basin under the south face and ascended the South ridge to the summit.

Jan 5th I had the honor of again working and guiding long time San Juan clients Lisa Lieb, Ilan Paltrow, and Mark Iuppenlatz. This trio has historically had some great adventures in the San Juans and today added to the list. Last year the team and I attempted, and finished, the first San Juan Haute route hut-to-hut traverse from Red Mountain Pass to the Ophir Pass staying in Browns Gultch Camp and the OPUS hut. We skied the South Face of McMillian, Southwest Face of US Basin Peak, West shoulder of Ohio Peak, and the lower slopes of Lookout Peak getting in over 15,000ft of vertical in 4 days all human powerd. 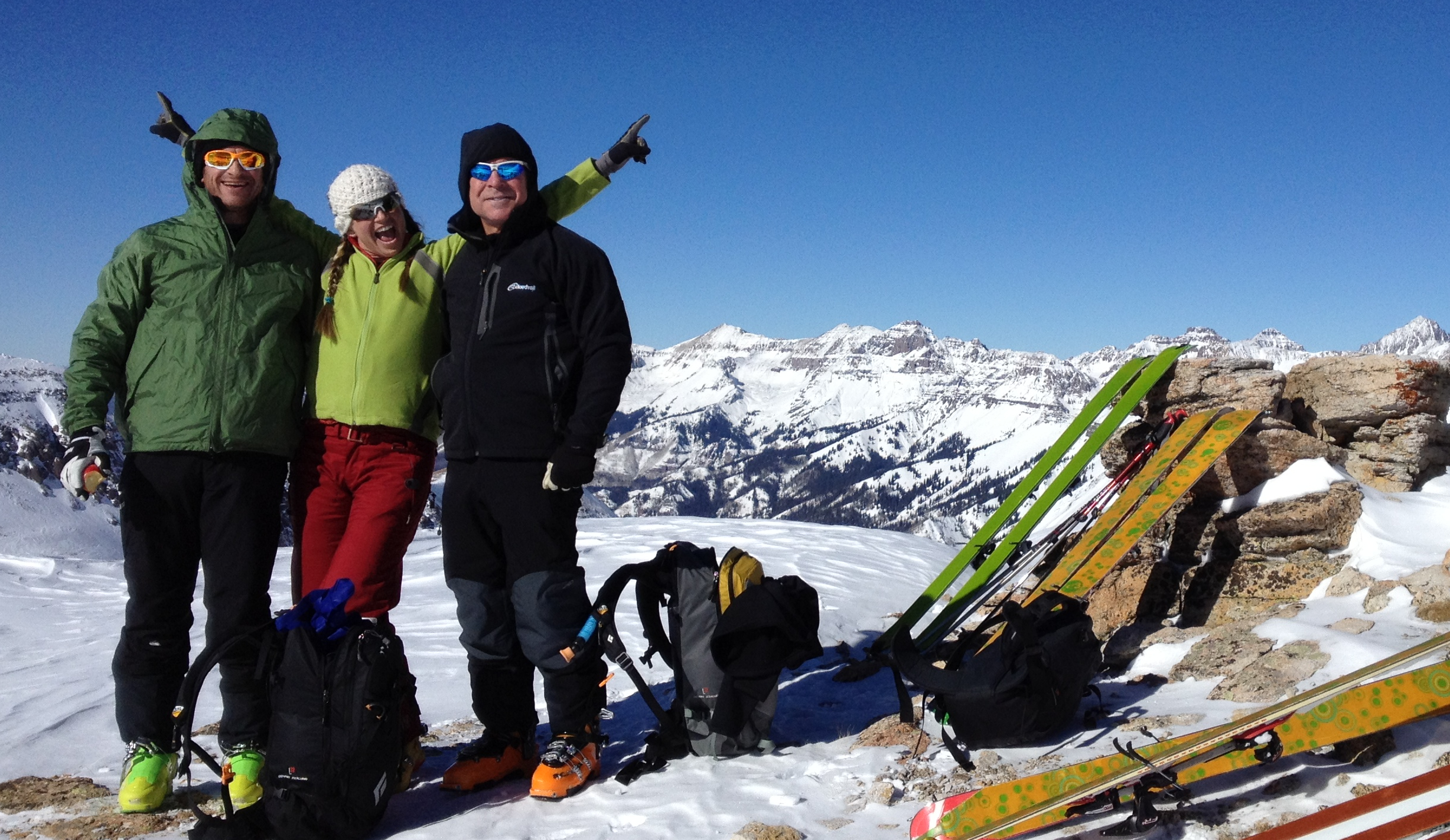 Here is the crew Ilan Paltrow,Lisa Lieb, and Mark Iuppenlatz (left to Right) after a grand climb above Mineral Basin. We have now reach the ridge crest with vast views of the San Juans and Tellurid behide us.

Mark Iuppenlatz likes skiing, more he like powder skiing. However, he is a peak bagger at heart and loves to add a summit to any outing. That’s what today’s objective was, to summit a peak, and it ended up being Trico Peak 13,321ft. This peak is the triple point to Ouray, San Juan, and San Miguel County(s). The peak is positioned in the center of a triangle drawn between Ouray, Red Mt Pass, and Telluride. Needless to say the view where expected to be fantastic and 360 moutnains. 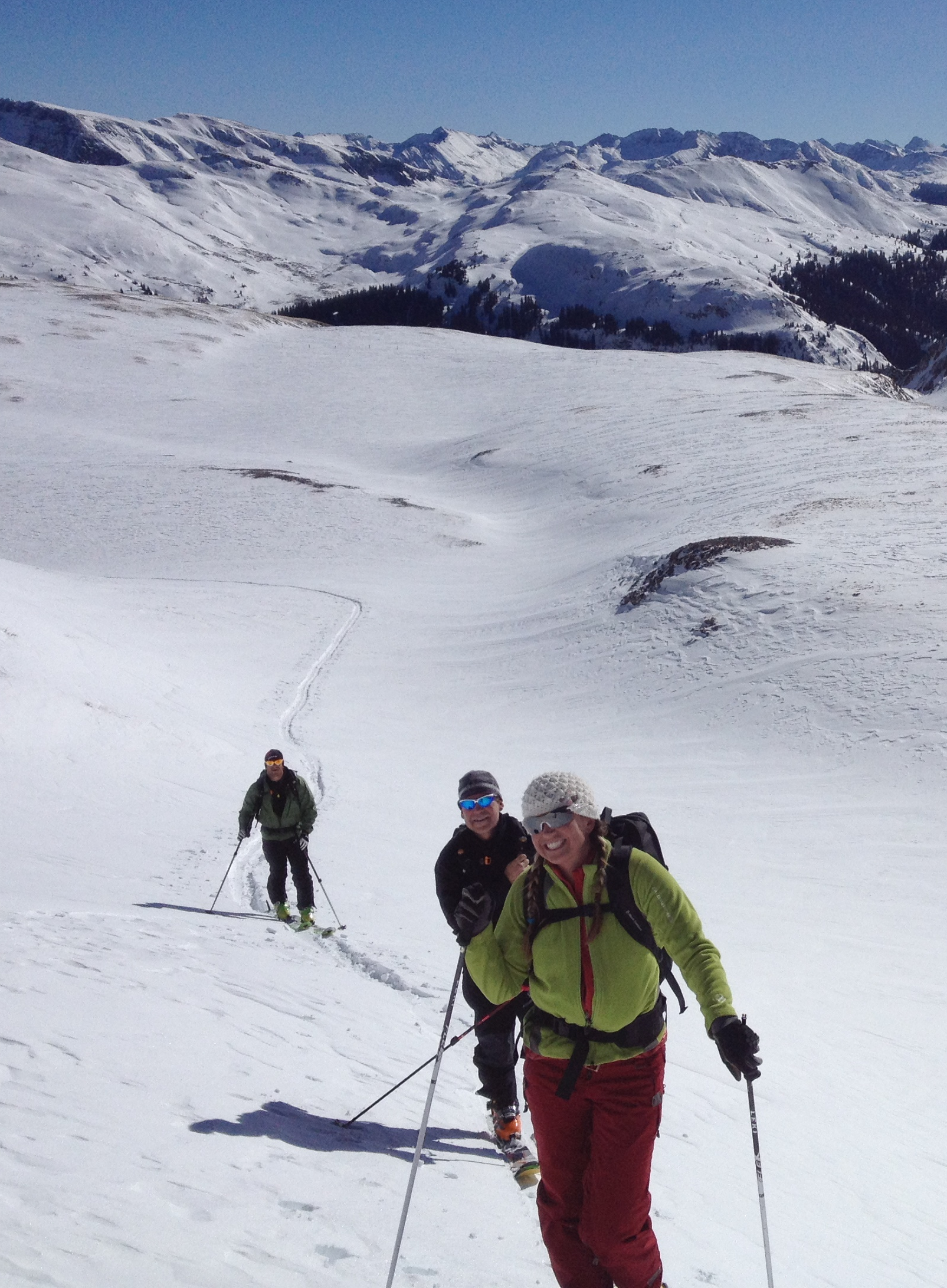 The crew high in the upper Mineral Basin

We chose this tour because it is an area less traveled and for many in the group a new area. We would not see other skiers or the mob crowding the back country, Also none of us has ever summited this peak. Conditions had settled enough to allow safe travel into the alpine and we wanted the odyssey. It was an opportunity to get higher, see some views, and ski some powder.

We spent a good part of the day climbing into the alpine terrain. The views became broad and more entertaining as we climbed. We reached the ridge crest and the air felt thin and brisk at 12,500ft. We could see most of the San Juans and down into Telluride. We climbed the South Ridge of the peak without our skis and it was a great climb to 13,421ft. 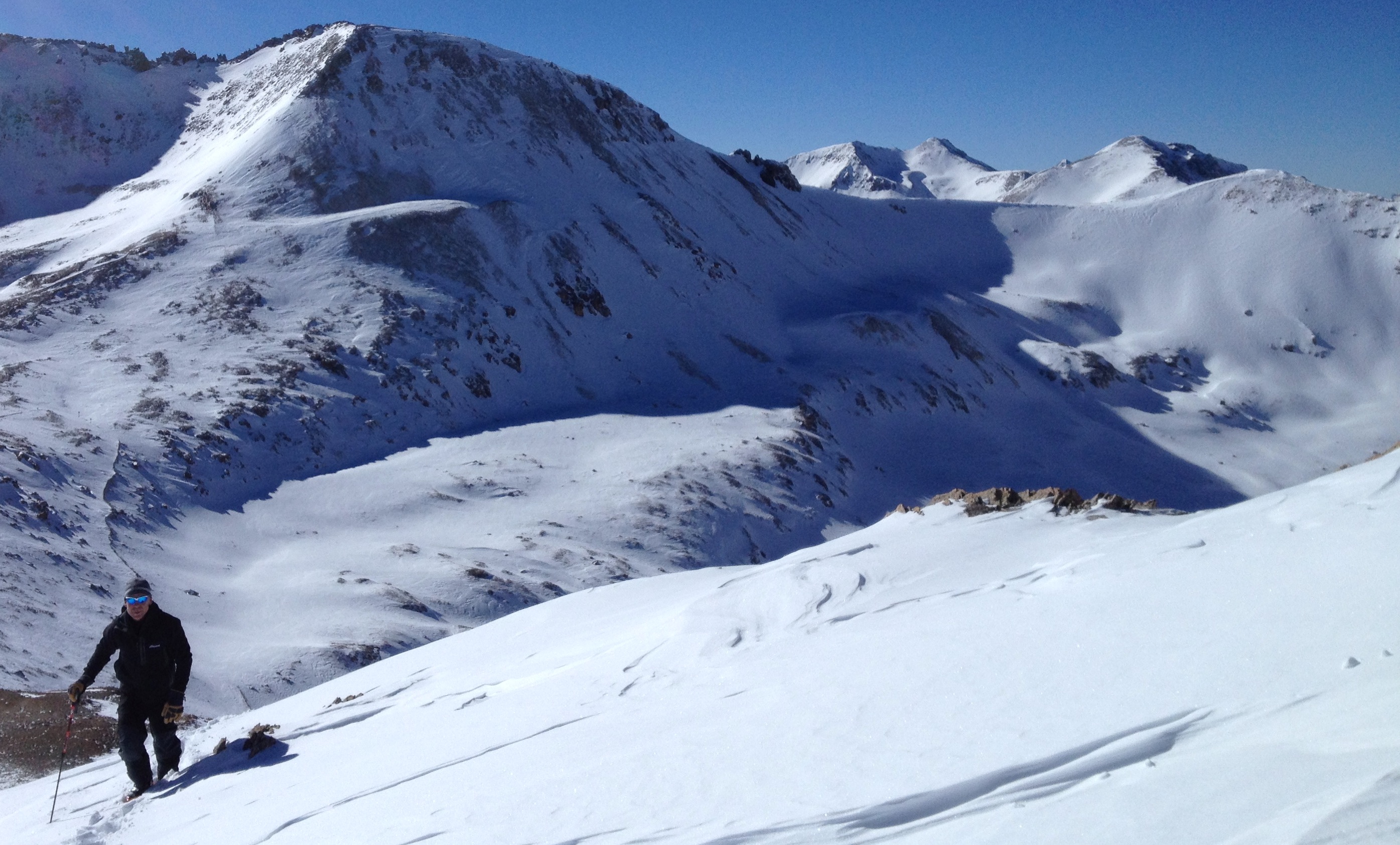 Mark finishes the last few hundred feet to the summit in the 360 views of San Juan summits. 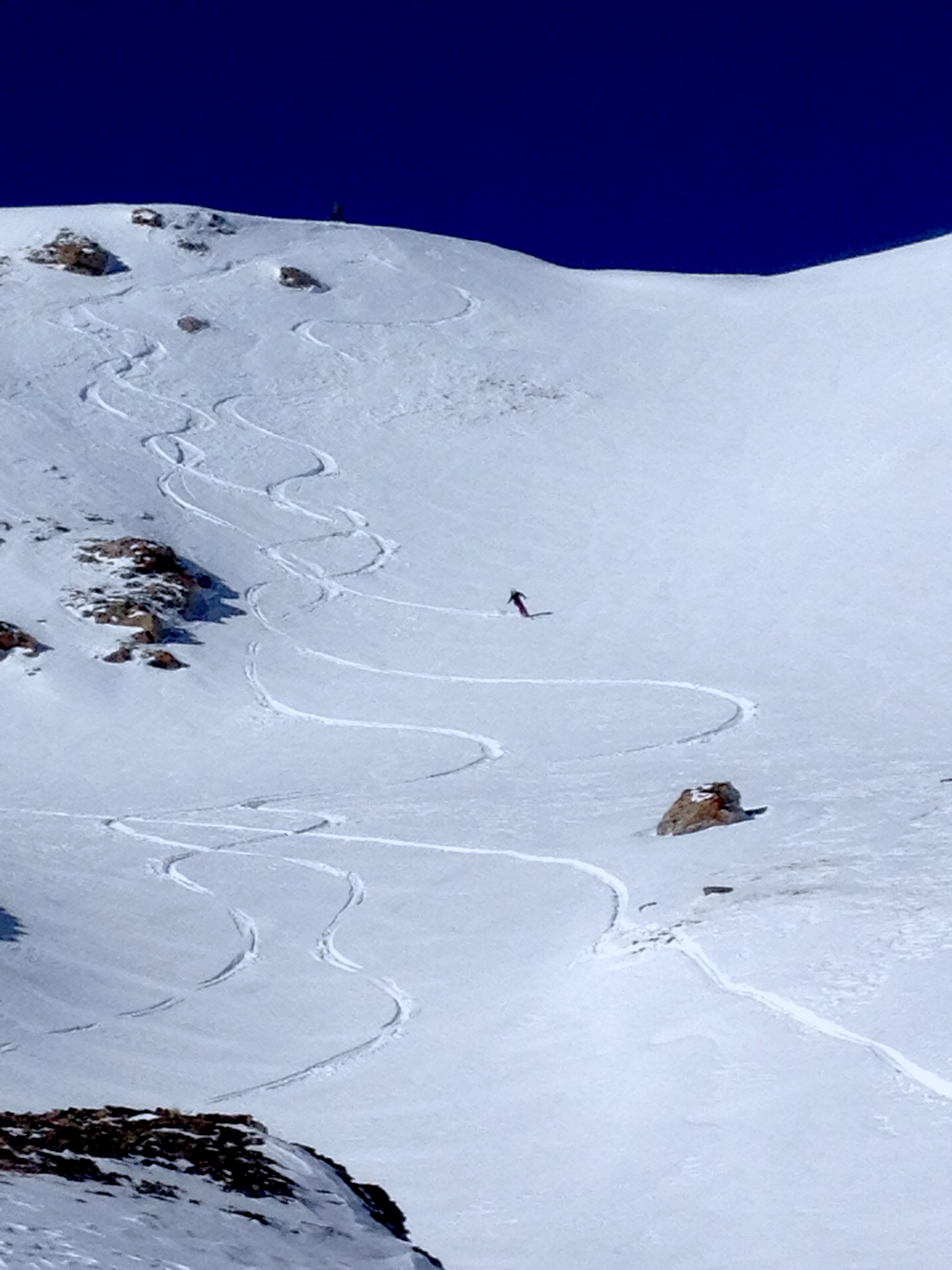 Lisa drops off the ridge and find her own line

After some great summit time we swiftly descended to the skis and began our decsent. We clicked in, pealed the skins, and began our flow down the mountain. We found variable conditions in the high alpine but conditions improved with every turn. We dropped into lower Mineral Basin and found fantastic runs on low angle rolls back into treeline on cold Colorado snow 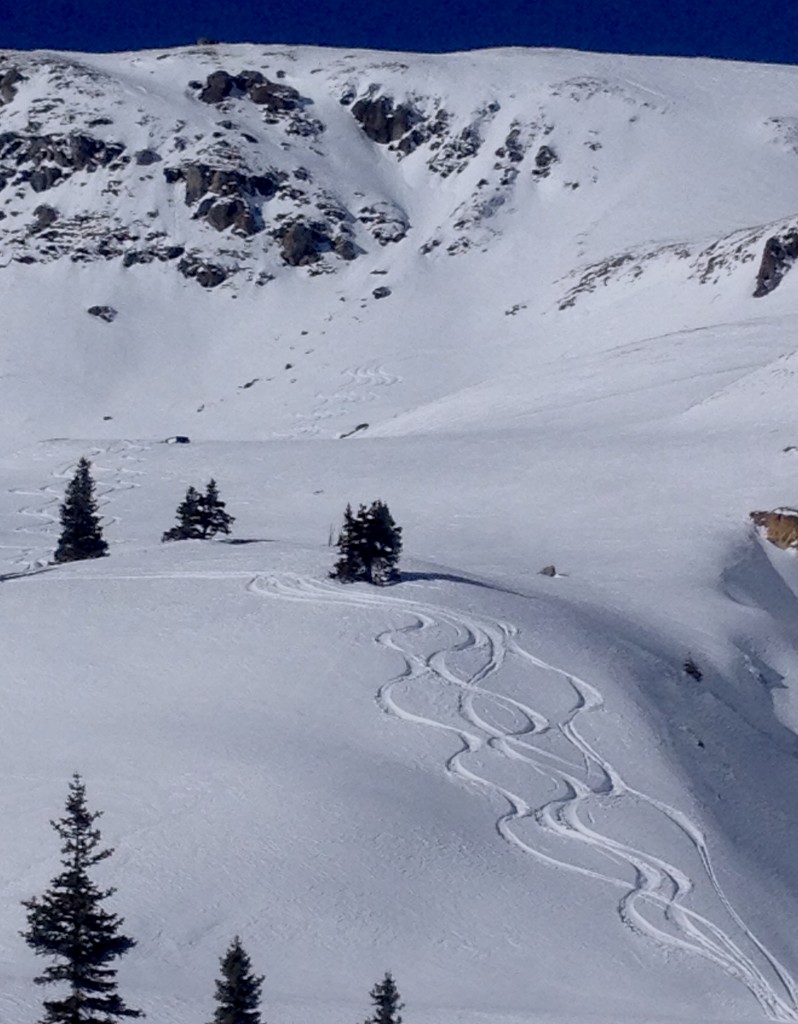 Lower in Mineral Basin we found what we were looking for.

It was a great outing with great people. Again are able to enter an environment that can be extremely hazardous, but with the right choices the mountains are the perfect place to spend a day exercising one of your key human rights… powder skiing in the San Juan Mountains.