Stairway to Heaven with Mark Miller

About a month ago I ran into Melissa and Steve Alcorn at the Ouray Ice Park. They had recently just climbed Stairway to Heaven in Silverton’s Eureka Canyon with Mark Miller. When I saw them I thought it would be a cool idea to have them write an account of the day with Mark. After all, both Steve and Melissa had climbed loads with Mark over the years and my idea was for her to place the day on Stairway with him in the context of all the year’s of guiding and instruction that they had previously experienced with Mark. I thought it would make for a compelling story about one of our finest guides and ice climbing instructors.

Melissa was happy to write the post and share some great pictures of the day. For whatever reason, I held onto the post for a period of time so that I could share it when the time felt right given the overall flow of the winter season.

The time to do so is now. Mark’s recent passing has affected all of us in the most profound way possible. This story tells that of Mark on one his best days – a Great Day in the Mountains with friends.

A Great Day in the Mountains 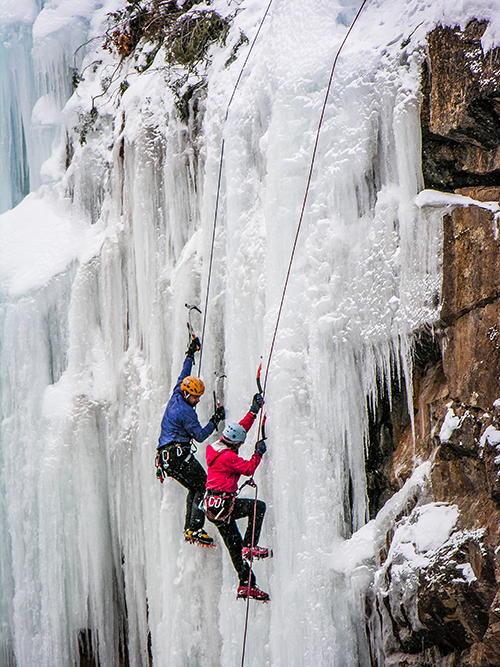 I was raised Baptist — instructed on the subject of Heaven and schooled on the routes to get there. I once commented that I was confident my heaven would have mountains and waterfalls, but was corrected that the Bible says nothing about things other than streets of gold. I remain a believer of the notion that paradise is found in earthbound heights and sometimes just beyond the gold mine.

The other lesson I bring from Sunday school is that listening to the disciples can expedite your pursuits. So it was that our disciple of ice, the man that ignited our fervor and fanned the flames for these past nine years was taking us up a Stairway to Heaven on a warm December day. Seven pitches of ice provides an abundance of time to reminisce on the unique bonds that form between guides, clients, and shared experiences. 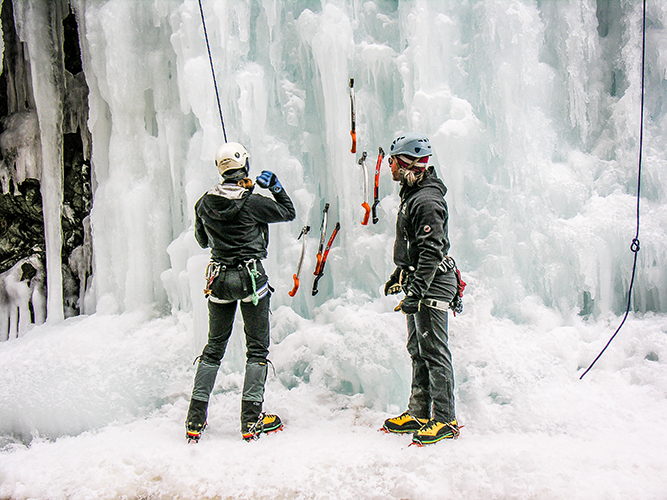 The Approach – We came to Ouray for the first time at Christmas in 2005 and walked into San Juan Mountain Guides, or really the breakfast room of the Vic, for our intro to ice climbing with a randomly selected guide. Mark Miller strolled in, claimed us with his faintest Minnesota accent, and ultimately changed our life. Hiking into Eureka on our way to the base of Stairway to Heaven, I was remembering that first day—rental gear, reluctant swings, and some bloodletting.

Pitch One – We have heard about Stairway to Heaven for a lot of years, but our timing was always off to climb it before avalanche danger shut it down for the season. This year has been lean on snow but fat on ice-forming cold. The three of us stood at the base and grinned like kids on an unexpected snow day. Ropes were stacked, harnesses secured, and Mark was off with a shout over his shoulder that he would try to keep an eye on us to see what bad habits we had developed. He knows my history and sordid predilection to hook. He spent hours with me that first day trying to get me to swing with a modicum of form and accuracy, and then he’d spent subsequent ice seasons listening from afar as my tools hit ice. He knows I can swing. 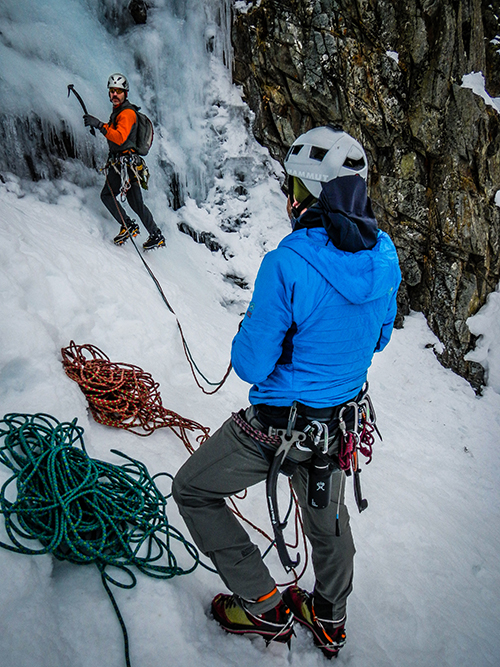 Pitch Two – Of course as soon as the three of us arrived at the first bolts we had our first “tune up” and, admittedly, we both knew we were overdue. Our second day with Mark in 2005 he handed me a pair of leashless tools and “released me” to be a rock climber on ice. That did it. A few moves up Pick of the Vic with those axes and my ice grin permanently set. I’d spend inheritance money that fall to get a pair of Nomics to bring back to the ice park. Mark drilled proper swings into me. Yet, before we could climb the second pitch of Stairway to Heaven, Mark needed me to experiment with my grip and try, just try, loosening my pinkies. “Like holding tea cups?” “Sure” he said with a “why hadn’t I come up with that” grin. With that slight modification pitch two was a really delightful climb, although Stephen was on the steeper right side of the ice and may have found more work and less delight especially with his fresh out of the packaging ice tools. We arrived to a “better” from Mark but were gently reminded that we had more tuning up to do with our footwork—no “x-man” stances allowed.

Pitch Three – The day was warm but the sun was sulking behind a thin cloud layer, which gave us time to get past the narrow icy crux of the third pitch without fear of it melting out. With our tune up corrections we were moving more efficiently, without sacrificing any of the joyfulness of climbing ice. As I watched Mark climb I was thinking back on a very snowy December day in 2006 when we returned to Mark and SJMG for a day of Camp Bird Road adventures. 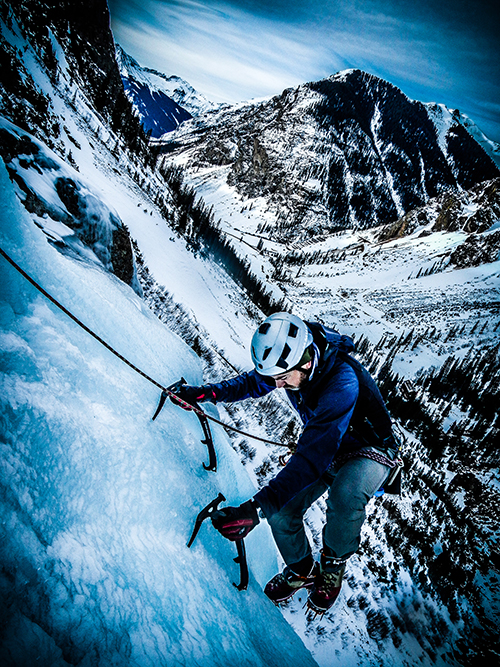 He took us to Choppo’s and Skylight that day, and we got to play on freshly bolted dry-tool route. If there had been any lingering doubt that we had found a sport we were passionate about, that day eliminated it. Ice was our thing, and backcountry ice was our goal. On the Stairway, pitch three was sustained time to ponder why we had set such a crazy goal? This thing was steep and I was grateful for a little bit of hooking along the way. It was also intoxicatingly beautiful.

Pitch Four and Five – These two sections of ice blur together in my memory. They are lower angle and the kind of blue ice that puts you in a punch drunk trance. You smile with each dance move up the frozen sculpture, and you hesitate on occasion to allow yourself time to stare into the soul of the waterfall that flows beneath the playground. Somewhere in there my mind wandered to another day we had spent on backcountry ice with Mark. After a couple of years of migrating from Oklahoma to Ouray for Christmas week to play in the park, we had decided to climb something bigger. On the last day of 2008 we climbed Ames Ice Hose with Mark. It was cold. I was nervous. Mark was reassuring. And the climb was amazing—full of those mystifying moments where the art of the ice or the grandeur of the view you are gaining leave you sure you have transcended into that paradise. I remembered that as I topped out of the ice and found Mark standing in a snowfield above the fifth pitch–a guide who became a guru, and evolved into one of our true friends. 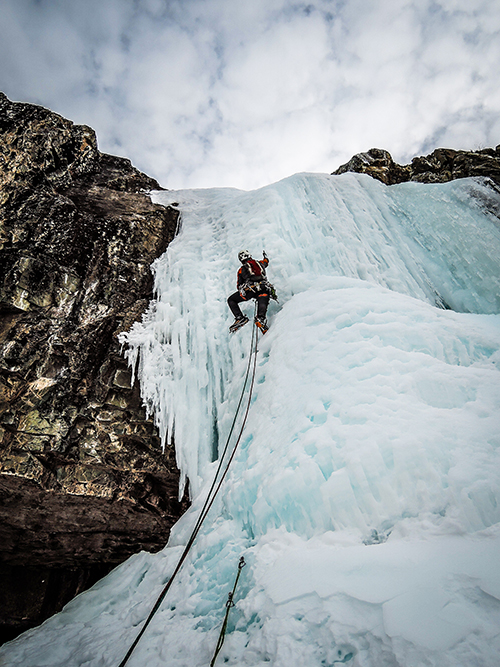 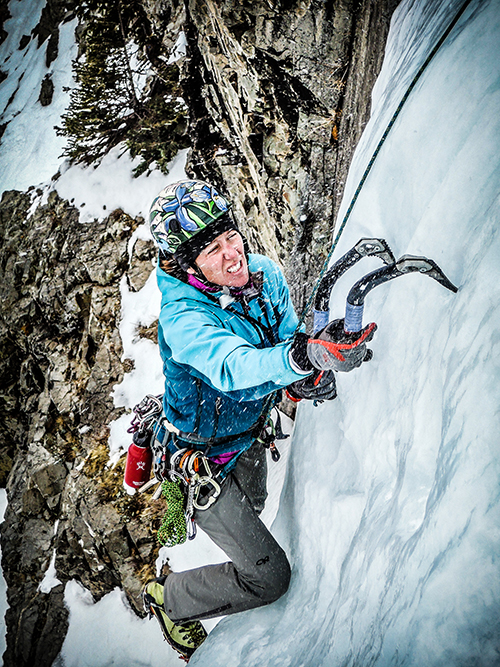 Pitch Six – The last two pitches of ice on Stairway to Heaven are less often climbed, a combination of low angle and less formation prior to the snow deluge that stops all climbing to heaven. We took a peak at the ice and realized you don’t turn down a chance to climb such things. Taking a chance was the reason we were even standing there nearly at the top of the Stairway. Mark had been such a good guide, and created such devoted followers of the cult of frozen waterfalls that we had quit our careers, left Oklahoma, and moved into the midst of our paradise. No longer did we have to gulp in a year’s worth of ice in one week with a long haul drive on either end. Now we can make it out when conditions are right. The gods have smiled on us. And on that last stretch of ice I saw into heaven – as I suspected all along, there are mountains and waterfalls. And Mark Miller. 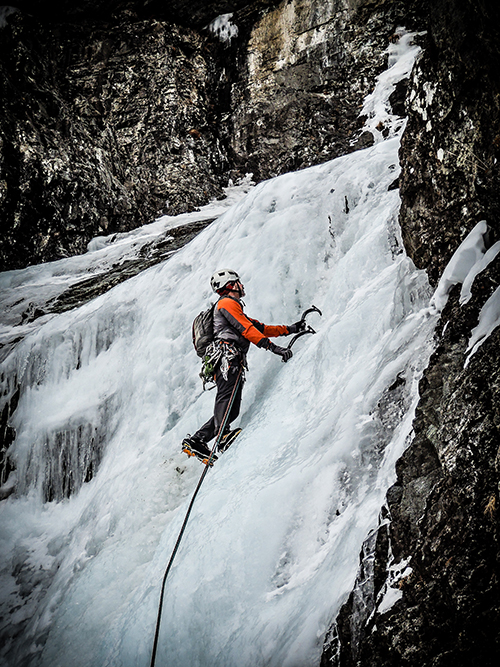 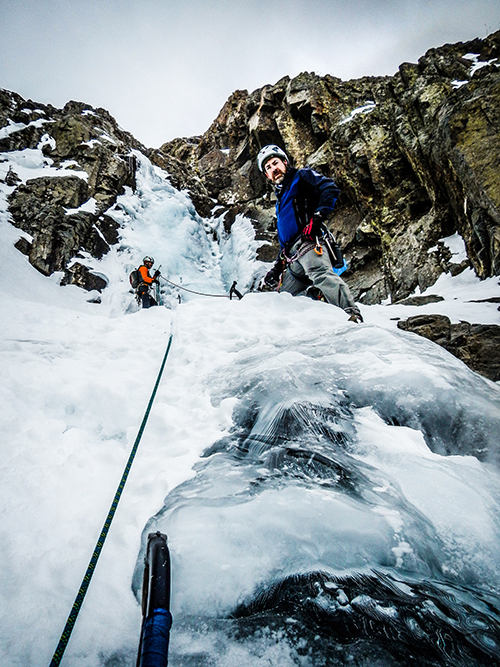 Descent – Typical of Mark, our descent was as instructive as the climb was blissful. First, none of us wanted to walk off from where we stopped so we had an impromptu refresher on the perfect v-thread technique. Then we stole freely from his treasure chest of tricks to improve multi-pitch rappelling efficiency. A week later, on our own, we’d practice the lessons on the gully across the valley and whisper gratitude to the clouds that we had been lucky enough to have Mark Miller approach us in 2005 as we nervously sat in that room wondering what would happen when we took to the ice.

It was a fantastic day, just another one in a string of such for the three of us. I am confident there are more ahead. The truck ride back to Ouray may have involved some plotting. I am equally confident that I will hear Mark shouting to me in the ice park the rest of the season that I need to drink more tea and keep those pinkies out. 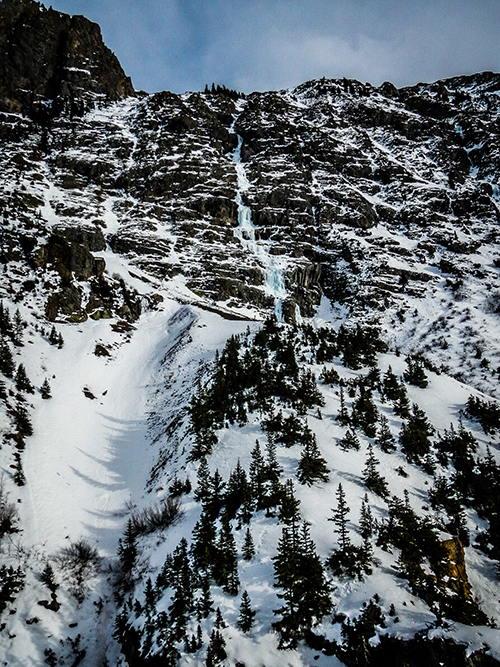 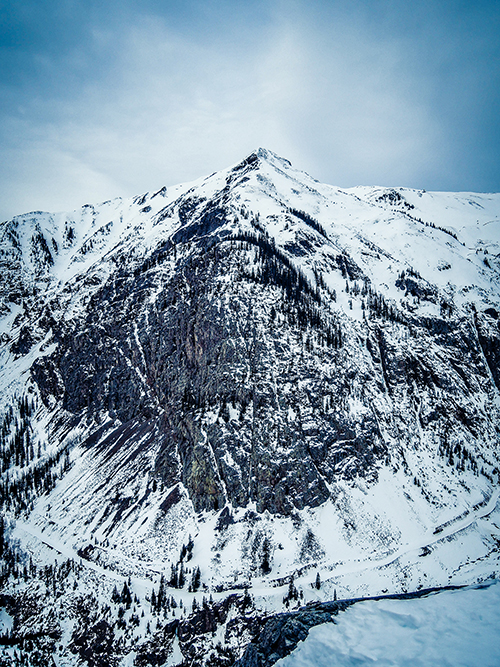