3 Interesting Facts about Our Ski Tour in Northern Italy

Recently, SJMG Senior Guide Mark Miller got a few days off of guiding locally here in Ouray & the San Juans. He took the opportunity to see how things were forming up and grab some conditions reports on a few of our local area hardman classics like The Talisman in Ouray and Bridalveil Falls in Telluride.

Matt and I climbed Talisman on Sunday.

The first pitch was in good condition. We climbed to the left side of the ledge to belay and then moved the belay to the right, below the start of the pitch 2 traverse, due to a lack of ice leading directly to the belay stance.

The second pitch was excellent. I placed two pieces of rock gear and the rest was completely reasonable with good screws, a few 16cm and a couple stubbies. Yesterday a party placed a couple V-threads, making a really nice belay.

The third pitch turned out to be the best of the bunch. Right above the belay there was enough ice to place one cam and protect the rest on ice as I climbed out of the roof toward the column on the left side of the upper curtain. After a  couple very pumpy to place screws, I turned the corner. It was solid, but very steep for a short section, which then backed off to grade 4 ice and a nice belay from screws in good ice.

We then finished the last 40 feet of grade 3 in a continuous spindrift, since we were no longer under the overhangs for protection. A quick rappel back to the ground, a little more snow slogging and a balance beam act across a log to get back across the river rapped up a fine day. 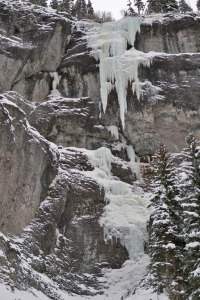 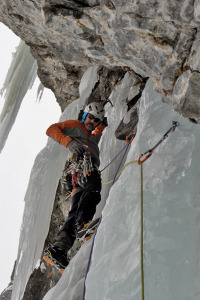 Mark leading the traverse on P2 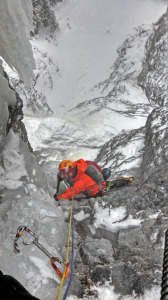 On Saturday Dave and I went to Telluride to see if Bridalveil was in, since word on it’s conditions were scarce. It looked a little narrower than last year and the cauliflowers looked a little bigger as we got up closer.

The cone at the bottom was pretty much like usual, maybe grade 3, but protection was rather poor until very near the top.  At the top of the cone my plan had been to head straight up a groove that looked the most promising from the ground. As I arrived I could see that it had a steady shower pouring into it from a dagger directly above it. By stepping left into an ice chimney I could see a reasonable path, if I could clear out the crazy hanging shafts of ice that barred the path without them taking me out, or getting too worked from the cleaning. At the top of the chimney I was able to quickly cross the raining dagger back to the right and into a nice rest, before continuing back left to a semi-hanging belay from very good ice in a well protected alcove.

Dave then led a short rising traverse to the right with a step down at the end, which put him on a large well protected ledge, that has been the belay station for pitch one the last few years.

From there the upper section of the climb was blocked by a 6-8 foot ice roof that had to be traversed around all the way to the left. Near the center I saw a line that might go if I could stem up a pillars left side, get on top of it under the roof without getting too off-balance and then pull a smaller 2-3 foot roof. The more direct line just looked to aesthetic to pass, so up I went. After a serious workout cleaning off some more ice daggers and other bizarre ice shapes that were barring the way, I down climbed back to a rest near Dave. With a good shake out and some gear already placed I gave it a run. Luckily I found an arm bar rest just below the roof, gave Dave a heads up and went for it. A few fatigued swings later I had a good belay station in sight and made a comfortable belay stance, while Dave got his turn at getting pumped stupid.

From there it was a nice long grade 4 stemming session to the upper ramp where it backs off to the snow gully and eventually the anchors. Dave arrived a little later for a couple quick raps and laughter the rest of the hike back to the truck for a mondo burrito and a casual drive home from a truly excellent day. 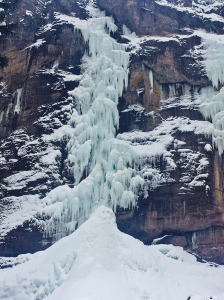 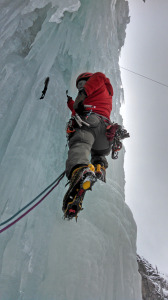 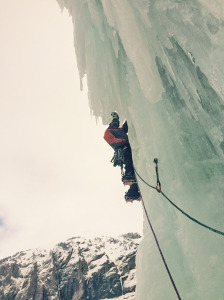 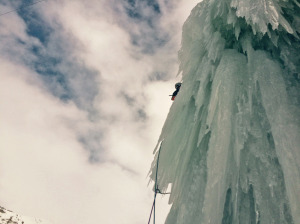 Mark setting up for crux 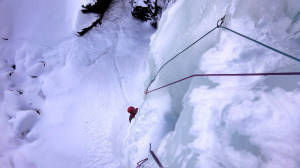 Dave getting ready to pull crux