A Few Photos from a Weekend in the Mountains

On April 23rd of 2013 I set out with three friends to do a trip that we had all thought about for a long time – a ski traverse through the heart of the Weminuche Wilderness in the San Juan Mountains. In previous years we completed  a number of other traverses in outlying parts of the San Juans – but this was the year to go for the big Kahoony.

Early debates about whether to basecamp and climb (and thus schlep extra mountaineering gear) quickly gave way to a plan to just move through the most spectacular part of the wilderness and get in as many great descents as possible on the way.

Entering the wilderness without a multi-mile long slog along a forest service road was where our friend Dave played a key role.  A well seasoned sledneck, Dave was able to bring along and rig up his machine to tow three skiers.  If you never have “skied” behind a snowmachine you are missing out on an important category of the sport.

Dodging rocks and racing uphill at 30 miles an hour is not to be missed. We knocked out the nearly 10 miles of road in less than an hour with some hilarious falls and no (serious) injuries.  We thought it best to stick with the nature of gas burning fun and celebrate our entry at the Wilderness boundary with a round of cold ones. 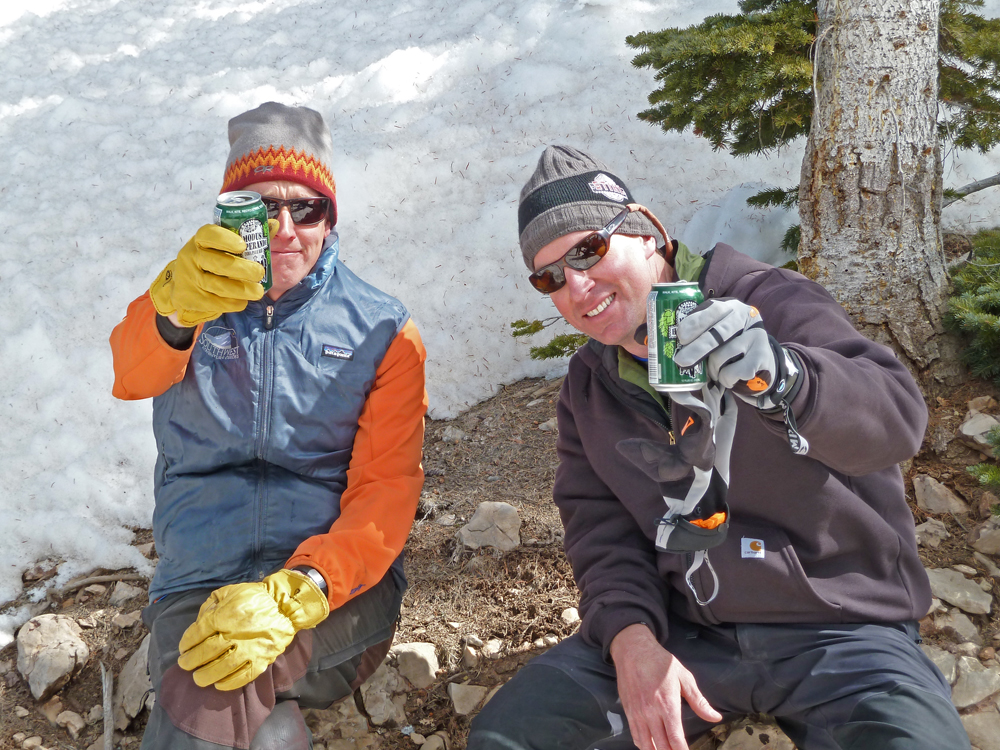 Now it was time to work.  Putting on our skins, we moved up hard snow and the above timberline ridge of Endlich mesa making our way to Sheridan Peak for a ski descent down its long northwest facing couloir to land us at our campsite near City reservoir.

Although the coulior itself presents a really nice line, the snow condition  were less than optimal.  And with fully loaded five day packs we did the best we could skiing the 45 degree rollovers on the variable very hard and crusty snow. 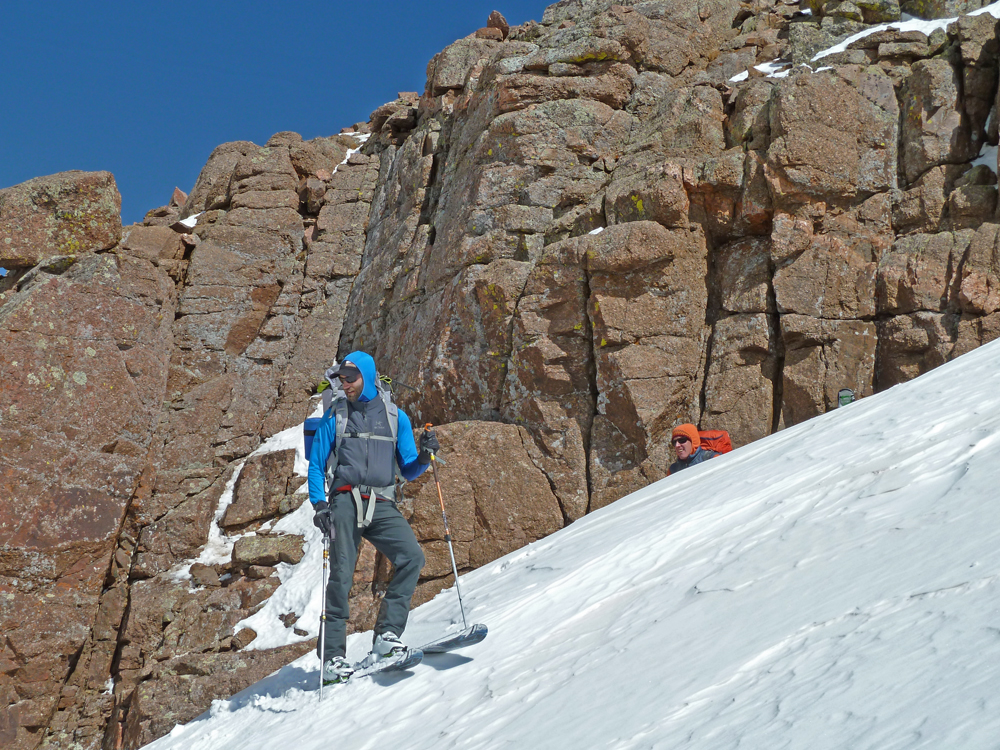 We set up a nice camp with great views of our route the next day.

Today it was our business to get up on and traverse the high alpine of Silver Mesa on our way to Chicago Basin.  The skies were grey, trending toward, but never getting to, whiteout conditions, and the miles rolled by.  We kept it going in hopes of a great ski descent from Aztec Mountain down into Chicago Basin.

Eventually we got to our col and were not disappointed.  Although the snow in this zone had a slight dust layer, a mile and half long and 2000 foot descent fired us up. 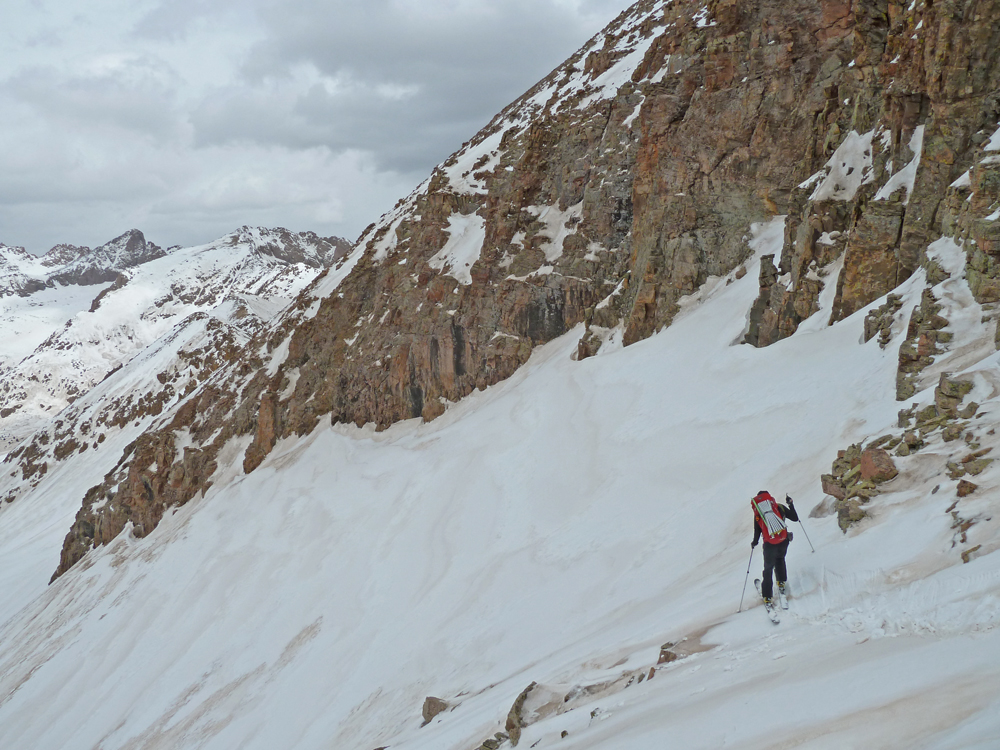 The bowl funneled into a neat gully feature that we managed to hack our way down.

We searched for dry ground in the basin and eventually found some slabs to cook and hang out on.  Then it started snowing…..  So far, a great 2 days, but the best was yet to come. 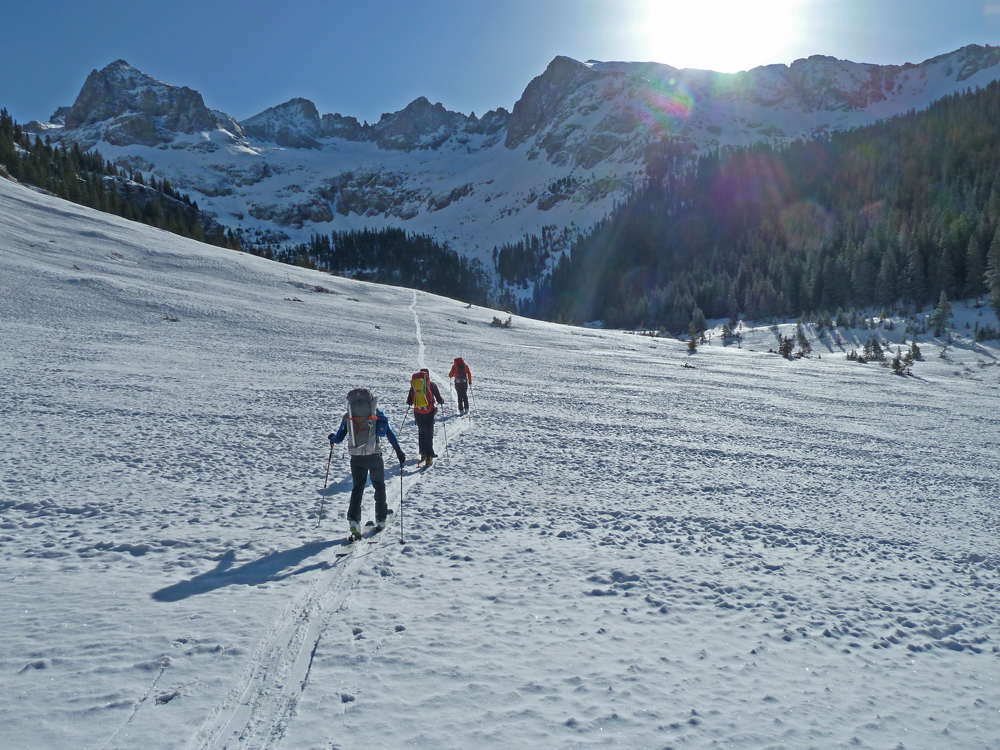 Today we had two plans, both leading to the same place.  Our original idea was to cross over into Upper Noname Basin via the Sunlight Col – and it did indeed look excellent both on the map and from a ski mountaineering standpoint.  But a somewhat late start and boiling sunshine led us to expedite our climb on these south facing slopes to the much closer, Twin Thumbs col. 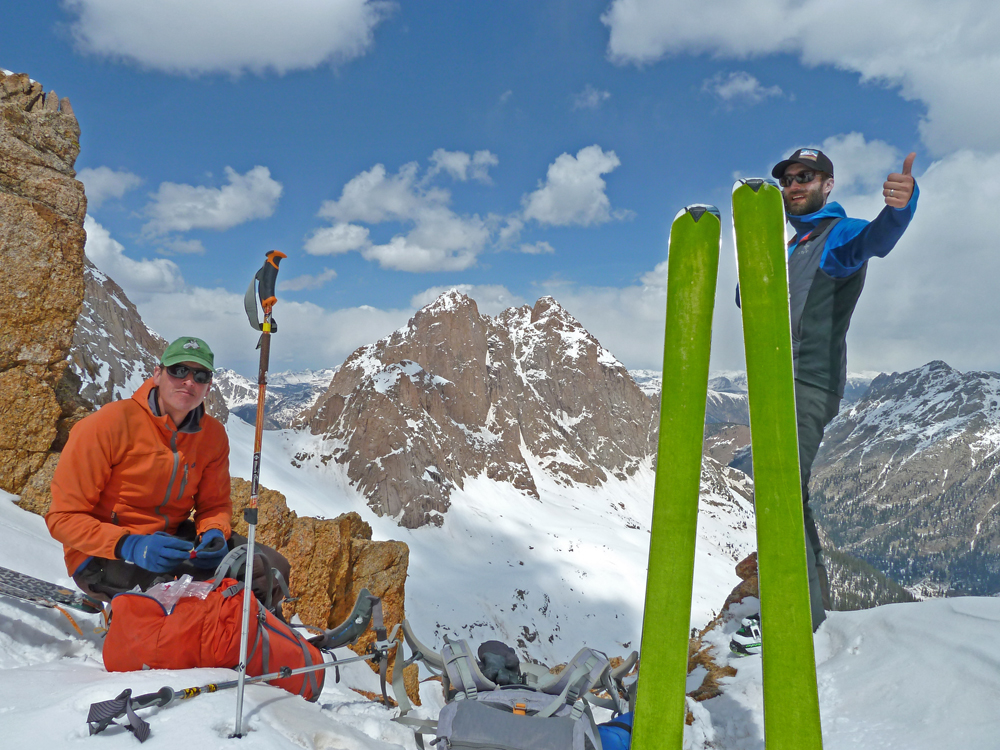 In the end, this was probably the better ski descent and the 2200 feet of turns, first powdery, and then corn snow, sealed any questions as to whether we had taken the best route. 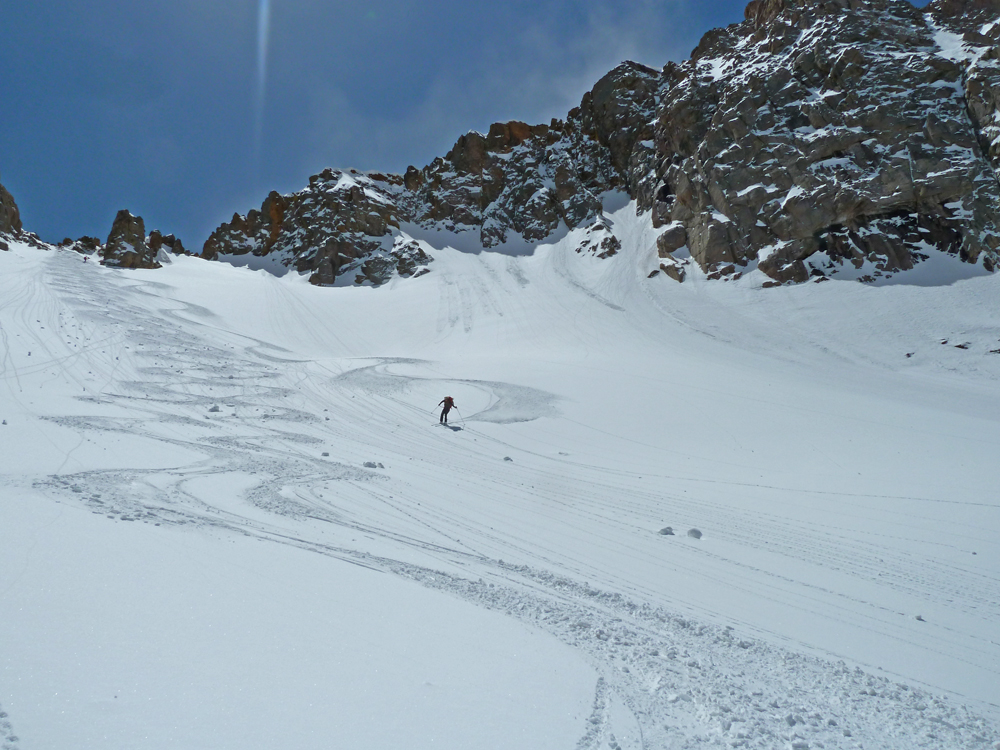 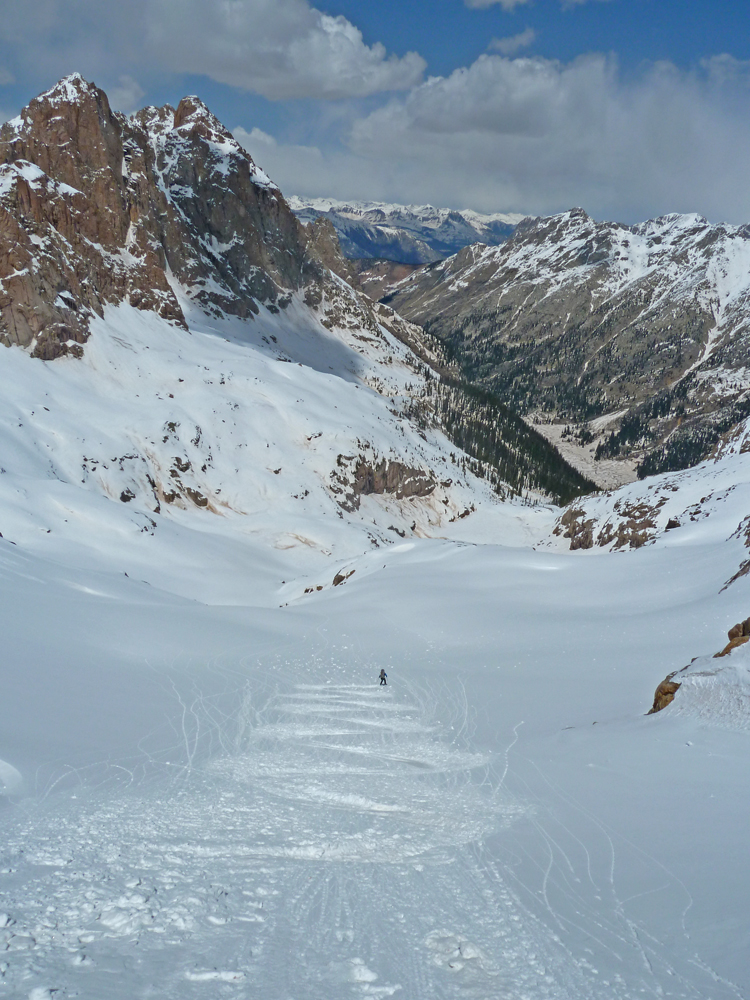 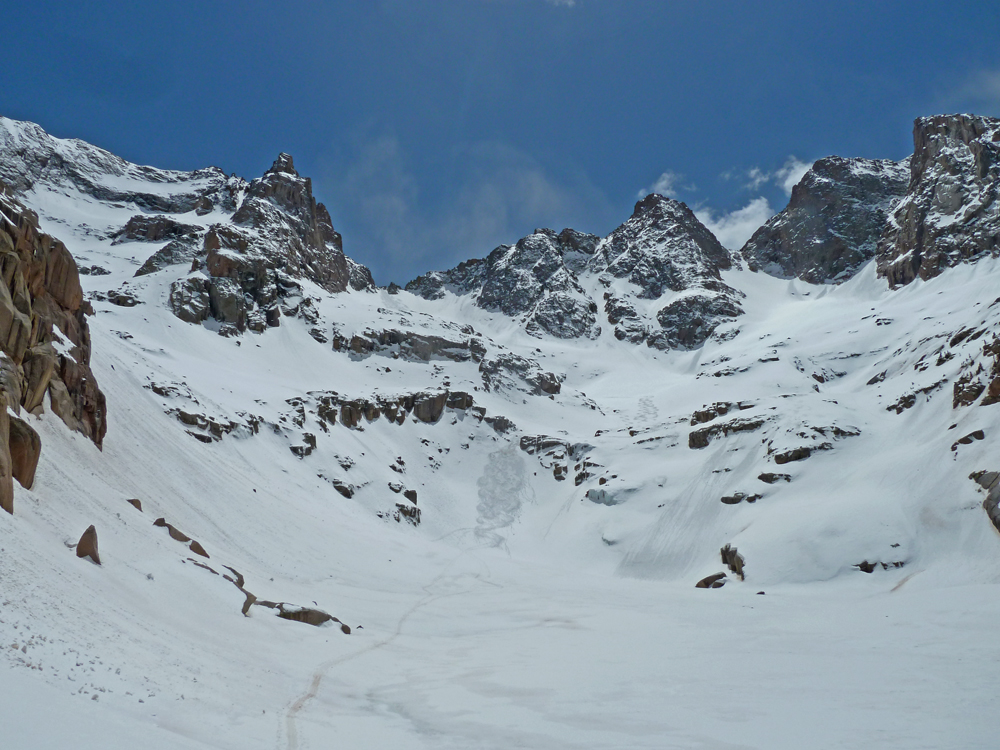 After a lot of incredible skiing we made it to treeline in Noname, rested and prepared to head up again to get into position for another big day. 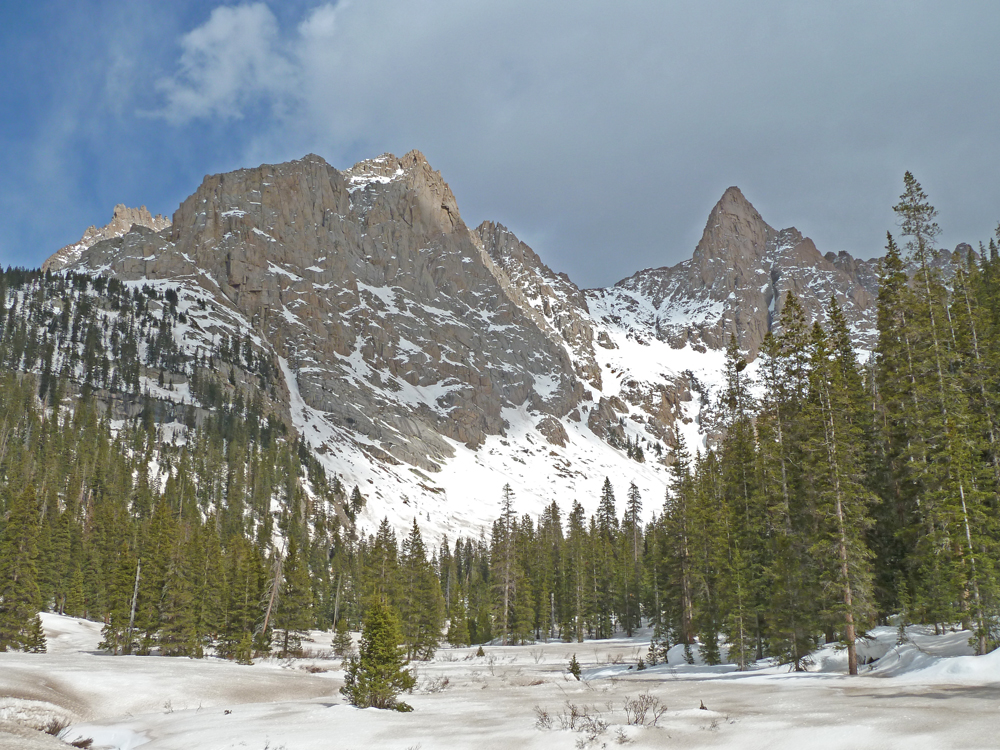 After a few hours of climbing we hit a perfect campsite at a small lake just below Jagged Col. 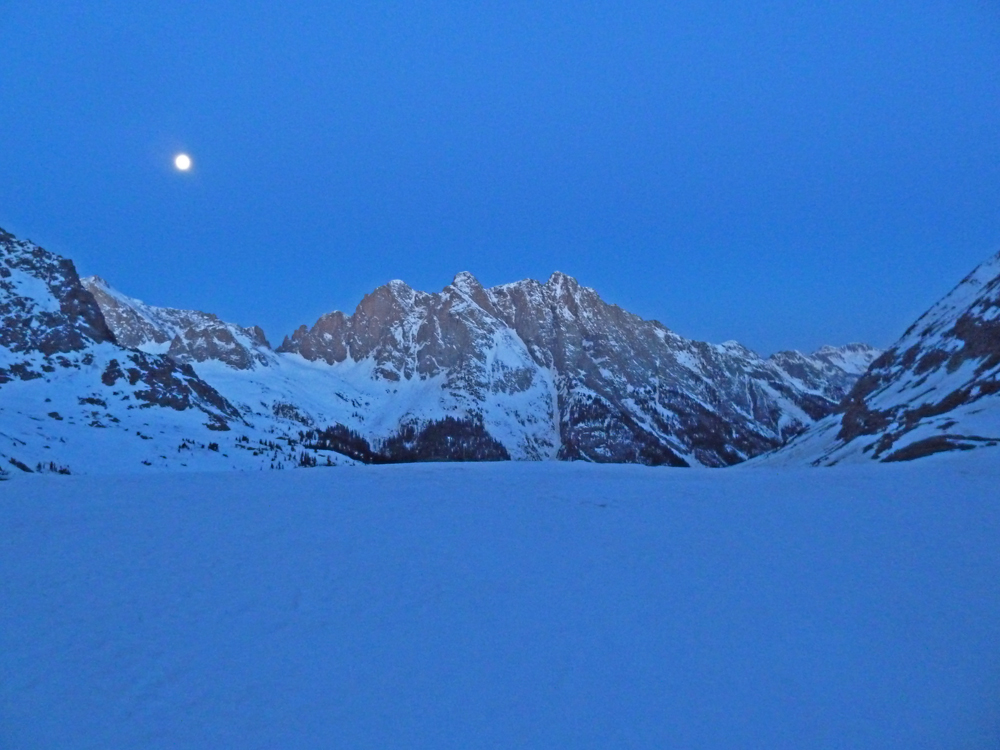 The evening ended with a funny disagreement about what time to leave in the next  morning, given our somewhat late start the day before.  The first big warm up of the season was underway and we had to traverse a lot of complex terrain the following day.

In the end all was fine, but not without a blood spurting knife wound (the outcome of a ski boot “whitteling” project undertaken in the dark) and a load of amusing discussion about which guy was the best map reader.

This was a big day with some questions.  Two things we knew for sure; we didn’t want to be on any steep sunny slopes in the afternoon and that we had 6 passes to get over so the plan was to get up super early and make haste just in case. 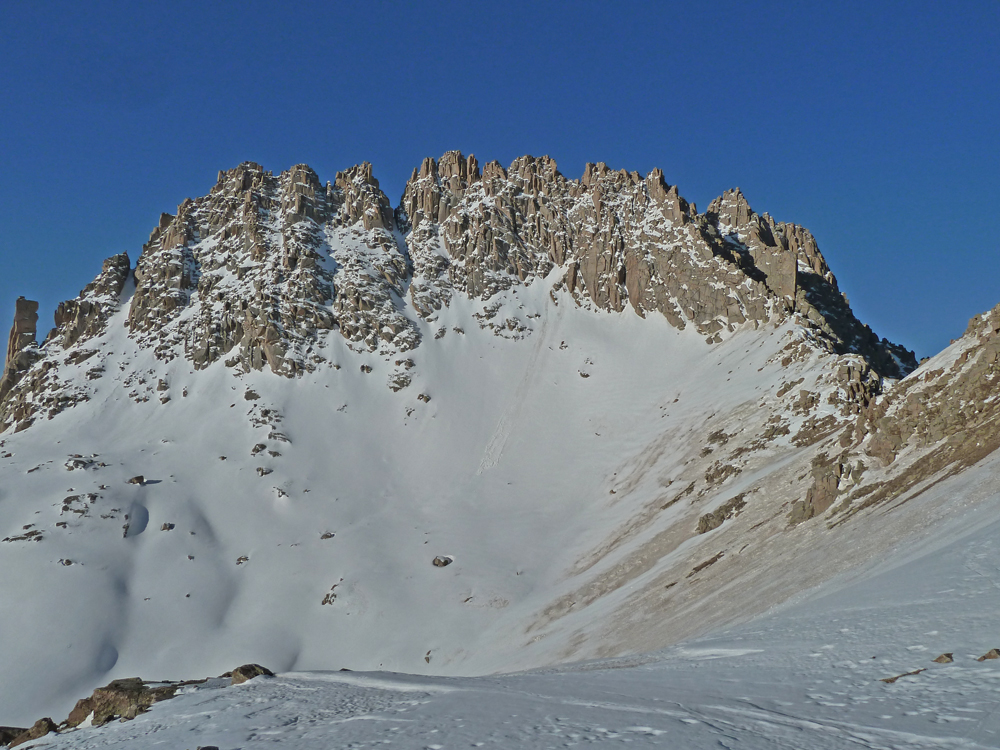 From the top of Jagged Pass we scooted directly north to the pass just west of Leviathan peak. 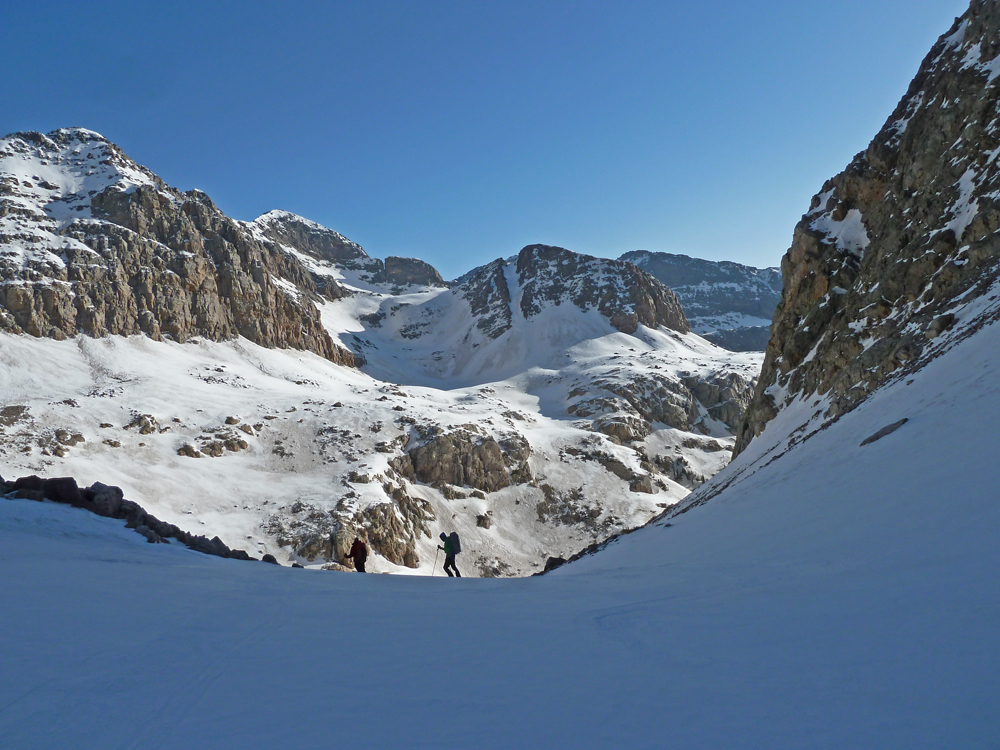 After a short but very cool ski descent into an amazing deep basin with huge walls all around we shot up another short pass and around to the east ridge of Peak 7 and then north again to a pass near Peak 8 and around again to a pass dropping us into Lake Silex. Five of the six passes were down and we had passed through some incredible terrain with good skiing. 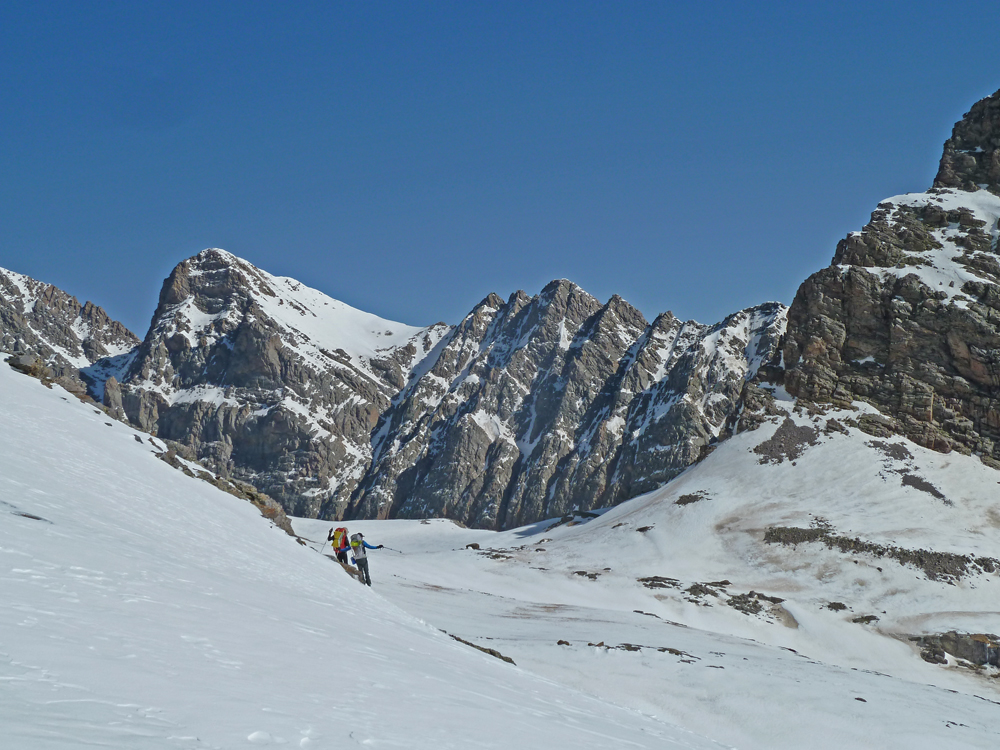 After making our final, mildly hairy, descent into the upper reaches of stormy gulch we laid down on some dry ground for a long nap under the impressive north face of Storm King Peak.

After a few hours we rousted ourselves into a lazy conversation about where to go from here.  Quality plans were laid out to ski off the summit of peak 2 or peak 1 the following day.  But as the afternoon wore on and the sun got lower in the sky we all settled on the more appealing option of just skiing to the Peak 2 and Peak 1 pass and drop the big and long descent right down into the upper elk creek drainage. 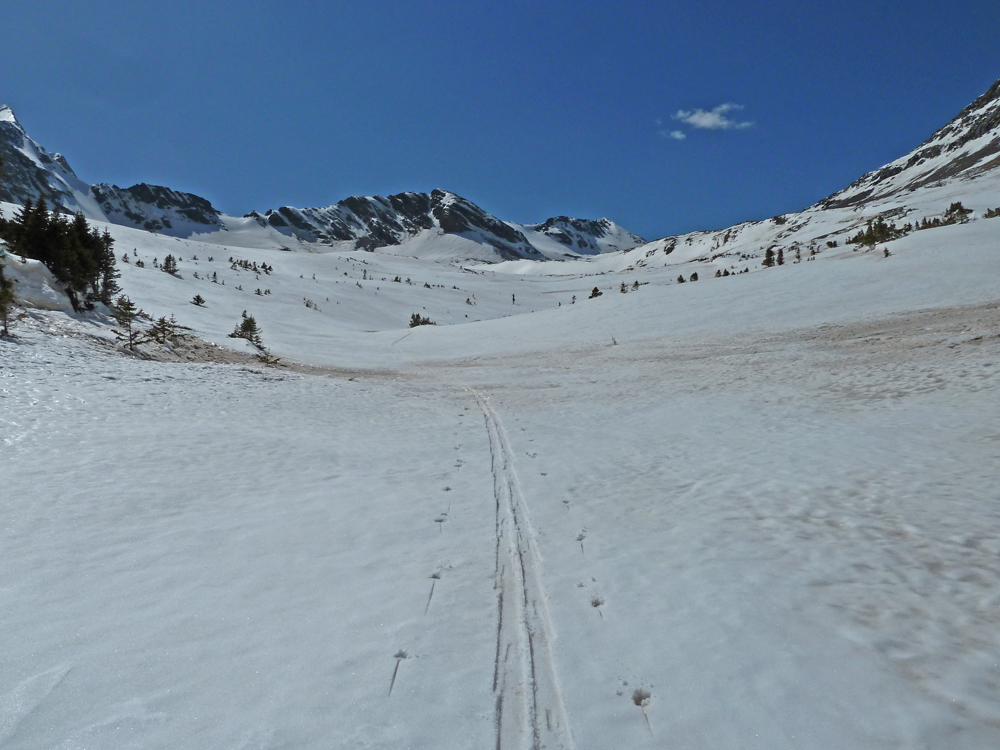 When we finally pulled the skins at the pass we were welcomed by a really nice mellow descent through more incredible terrain and a sweet dry campspot. 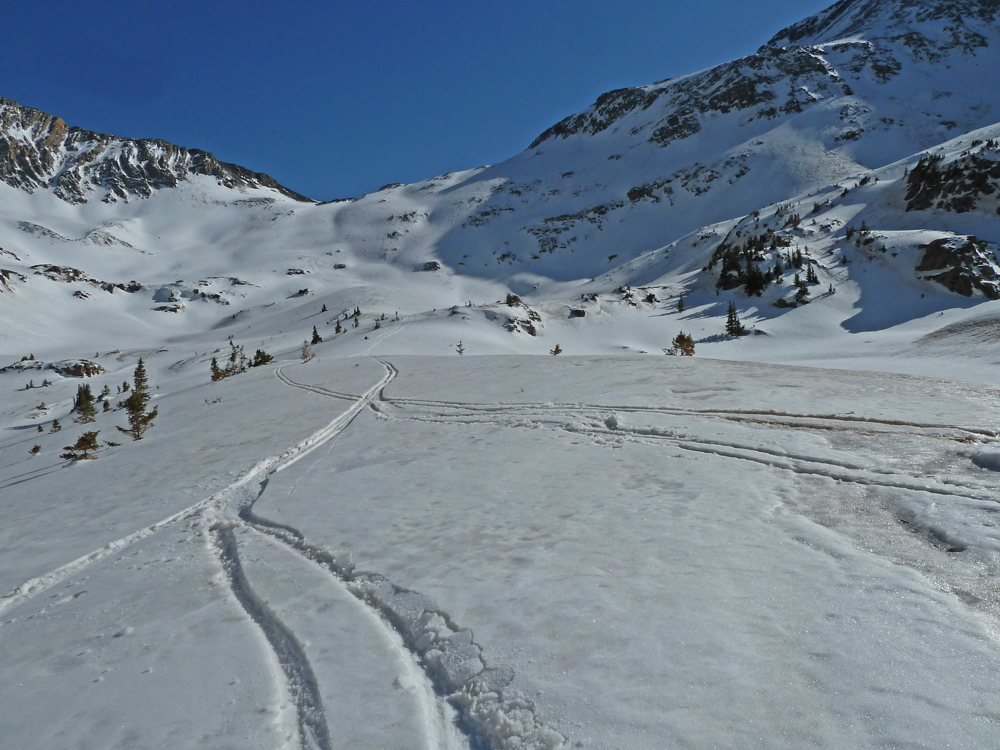 The only day we didn’t get a ski descent in, but satisfying nonetheless.   Our dry camp in an upper Elk Creek Meadow was warmly welcomed with a nice fire, much eating, and polishing off the rest of our small (strictly survival) supply of booze and tobacco.  We woke up late, started another fire, and ski booted all the way down to the train tracks in Elk Park.

From here, the prospects of hiking up the 5 miles and 2000 vertical up to Molas pass seemed like an unfitting end to our journey.  It was early season, the train wasn’t running, so we opted to hike out the tracks into Silverton.  About 2.5 hours later we were walking up and down the empty streets of Silverton with skis strapped to our packs looking for an open restaurant.  Finding none, we hit the liquor store, bought some Coors and couple bags of Funyuns and sat out front on the small grass patch to relax and await our ride.

Shortly thereafter a Sherriff deputy pulled up and we thought we were busted for having open beers in public! But no, he just wanted to know about what we had just done!  This is the Southwest Colorado I love, when mountain folks young and old are interested in hearing about adventures.  He was a nice guy and seemed genuinely excited for us and our trip.  Cool. 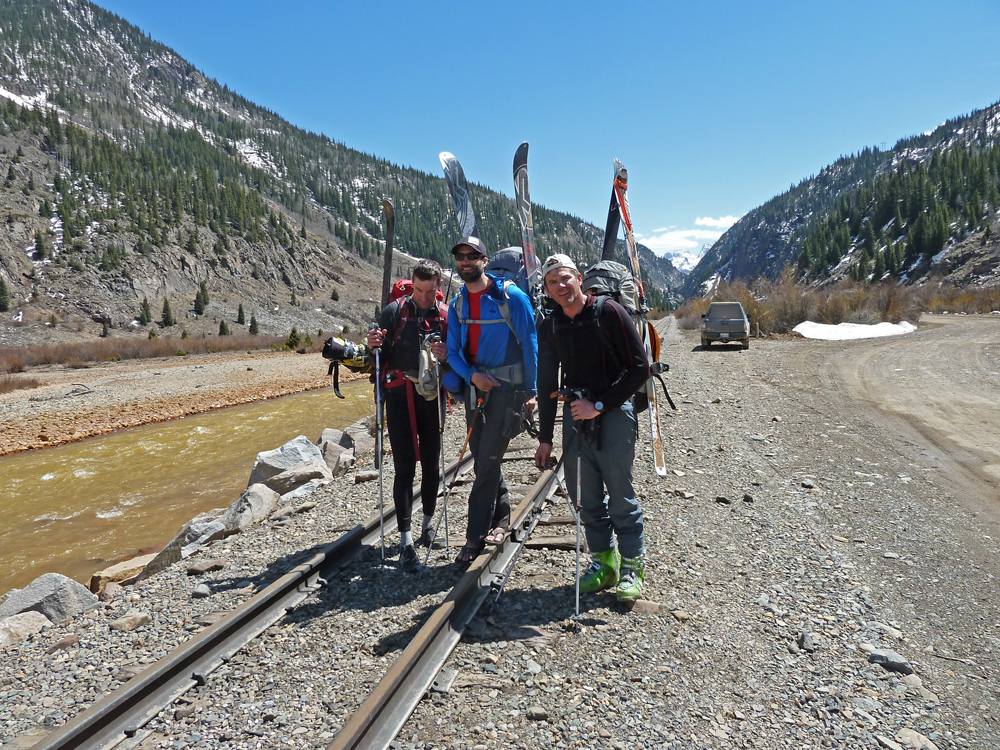