5 Reasons Why You Should Climb Mt. Rainier

I have been a rock and ice climber off and on since the mid 1970’s. I have always enjoyed climbing and have been fairly competent (lead 5.9, used to lead 5.10 and climb WI 3) but have never taken climbing too seriously or have been consistent with it to reach some of the harder levels. Last winter some friends of mine were heading down to Ouray to go ice climbing with San Juan Mt Guides. I have always wanted to go there to climb but I had reservations about using guides since I have never “needed” a guide in the past. All I can say is I was completely surprised with how much fun I had. The first day we spent in the ice park playing around on easy routes which after a few laps I must admit I was getting bored. One of the guides ask me if I would mind if he gave me a couple of pointers. He told me a few things and immediately I was climbing much more efficiently. Now I picked the hardest options to climb and do laps and found I wasn’t getting tired. I really wished someone told me these things years ago. The next day we went into the backcountry and the first climb was a WI4/5 route for a full 70 meters. I didn’t say anything but inside I felt a little anxious to say the least. Once on the climb I was in the groove and was comfortable and relaxed the whole time. We spent the next couple of days climbing similar routes and just had a blast. 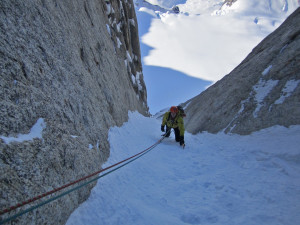 High up on Ham n Eggs on the Moose’s Tooth

Later when I was home I received an email from San Juan Mountain Guides asking me if I was interested in climbing Moose’s Tooth in Alaska. I had always wanted to do that climb but never seriously considered it but now I had the opportunity right in front of me and my wife was telling me to go. How could I pass that up? Back in 1989 I attempted the West Rib of Denali with a friend but for a number of reasons we didn’t make the summit. I had some other friends living in Anchorage that allowed us to mail gear to them ahead of time and then when we arrived we spent the day repacking at their place and then they drove us to Talkeetna. Having them support us made the planning so much easier. Since they no longer live in Anchorage, I haven’t considered climbing up in Alaska due to the complexity but using San Juan Mountain Guides all the planning and staging has been done. I arrived at the airport, was picked up at the baggage claim, driven to the grocery store to purchase some additional food items and went straight to Talkeetna. It was so simple. The only hard part was I had to carry my own luggage to the car. The next morning we flew to the base of the climb. 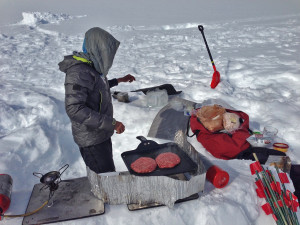 When ever I climb I go as light as possible; fast and simple. The guide service showed me a new concept – bring everything! It was great. Camp was so much more comfortable. I had a three person tent to myself. I had gear spread out all over the tent and no one to complain about it. No one else’s smelly socks or getting snow in the tent or listening to the guy next to you snore. The list goes on. The food was also another great revelation. Our food bag weighed more then all my gear combined! We always had something good to eat. I have always said that food in the backcountry always tastes so much better than when you are home but this time it was that good. We had enough good, quality snacks that we didn’t need to cook any meals: quesadillas, mochas, cheeseburgers, grilled cheese sandwiches. I was becoming concerned  that when I returned home I would have gained weight and my wife would be wondering what I had really been doing. 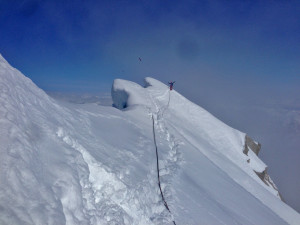 The summit of the Moose’s Tooth

The climb was absolutely fantastic. The first climb was Ham & Eggs. This was another warm year for the area so we wanted to try to get moving early to be off the summit before the snow began softening. We were on the first pitch right at first light. Some consider the first pitch the crux since it is mostly rock. It went really smooth with no real effort. The next four or five pitches (mostly hard snow/ice) buzzed right by and then the next crux, a  water-ice bulge that is a little overhanging with thin ice above. With proper foot work it was fairly simple and it too was behind us. There was another water-ice pitch with another bulge crux and again with a little finesse it was behind us. The higher we went the colder it became, so towards the top we had excellent neve’. When the calves started to burn the slope lessened, perfect conditions for the French technique to relieve the calves. 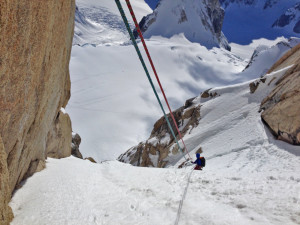 Toward the col we simul-climbed the last four to five hundred feet to the summit ridge. A quick traverse brought us to the summit. We didn’t linger since the sun was coming down pretty hard and the snow was starting to ball up under foot. Back across the summit ridge, a couple of vthread wraps down to the col and 15 rappels later we were back in camp, 14 hours after we started.

We rested the next day and watched the conditions on Shaken not Stirred. This climb should be called Shake and Bake. It really gets baked by the sun. From all the direct sun there is constant debris exiting the bottom of the climb. The climb is a beautiful line (in good weather) but there is no where to move to avoid getting hit. I really wanted to climb it but we decided to play on just the bottom pitches and retreat in time to be clear of falling debris by noon. Again at first light we were on the bottom pitch. It was almost completely rock since the ice was melted out but there was some quality frozen dirt that would hold a pick; another outstanding pitch. After a snow pitch we were at the base of a couple of ice pitches that were averaging 12 to 14 inches wide. They looked fantastic but we knew we needed to be turning around so we started the wraps down. As soon as we were back at camp we watched debris start to rain down the climb. Too bad it was so warm. 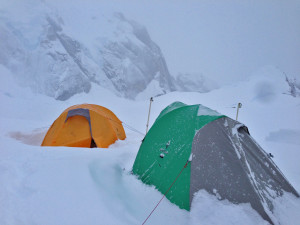 Alaska can get stormy!

We called Talkeetna Air Taxi to come pick us up since it was just mid-day. Our scheduled pickup was for tomorrow morning so they said they would pick us up in the morning. We asked them about the weather to be sure the conditions were good since today the conditions were perfect. They have the computers and access to the weather information and we don’t so they said don’t worry there was plenty of time and they would see us in the morning. Around midnight the snow started and continued for the next four days. I missed my flight out of Anchorage as the snow continued – welcome to Alaska mountaineering.

Andres, my guide, never showed his frustration. Yes he was disappointed that I missed my flight but what can we do? We sat around telling jokes, eating and making hot drinks. I read my books and started on his, then we would eat again. After a few days we moved our camp closer to the landing area and joined two other guided groups; one group of two and another group of three. Seven of us waiting for a clearing so we could head out.

This is where I must say I was so impressed with Andres and San Juan Mountain Guides. Of the other two groups one guide stayed with his client in a tent and watched DVD movies. The other guide stayed in his tent and didn’t do anything for his two clients, but Andres cooked up more quesadillas, burritos, hot drinks and other snacks for us and the other team’s clients. They were so impressed with Andres and sad to say a bit disappointed with the selection of their guide. I was shocked at the difference in the service between the different groups. I have been stranded waiting for a clearing in weather many times before but this was truly the most enjoyable time I have had in these conditions. Attitude makes all the difference. There were many times we almost had tears in our eyes from laughing so hard. I will always consider this as one of my best trips ever. Thanks Andres and San Juan Mountain Guides.